When a group of friends sets out to use the abandoned Bodega Bay Inn as a party spot, they find out first-hand that the bizarre local folklore is more truth than fantasy as an army of twisted autonomous Puppets have their way with the trespassing teens!

The Bodega Bay party goes sour when a dead body turns up. Now, as the remaining teens search the Inn for their missing friends, the Puppets increase the body count! But are the Puppets working on their own accord or is there a new Master in the shadows? The Puppets are back, and they’re out for blood! 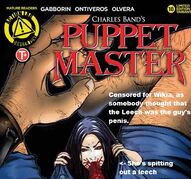