The Adolf Hitler Puppet is a satirical string marionette Andre Toulon created to show his disdain and disapproval of the Nazi movement. The puppet was never alive but operated on a string by Toulon. He would put on children's show using Six-Shooter shooting at Hitler's feet like in a wild west movie making him 'dance' in fear to dodge the bullets. It was Toulon's way to show that he favored the American allies force over the Nazis. One of the people in the audience watching the show was Lt. Eric Stein a Nazi. After being upset that Toulon had mocked his leader he tried to convince Toulon to change the subject matter of his show but Toulon refused so he spied on Toulon and his wife and discoverd that his puppets were alive and reported it to Major Kraus. Kraus broke into Toulon's home and arrested him, killed his wife and then destroyed the Hitler puppet. 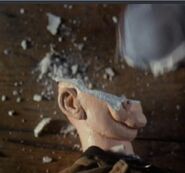 Hitler puppet in the Eternity Comics
Community content is available under CC-BY-SA unless otherwise noted.
Advertisement