Afzel is a character in the Puppet Master Franchise. Afzel plays a pivotal role in the series as well because he is the character that taught Andre Toulon the ancient Egyptian secret of life. Afzel only makes one physical appearances in the series in Retro Puppet Master.

The franchise tells of two different origins of how Toulon learned the secret of bringing inanimate objects of life, however the second one has only been featured only in Retro Puppet Master and doesn't seem to be reinforced in any of the other films. In the Action Lab Comics it is explained that Toulon originally learnt the magic from Afzel and then a more refined version of the magic from a merchant while in Cairo.

The following text is about the Cairo Merchant

The first origin that is given in the series is in Puppet Master II. During the flashback Toulon has, he is seen putting on a puppet show version of Faust, however an Egyptian in the audience sets the stage ablaze, thus ruining the puppet show. The merchant meets up with Elsa and Toulon, telling them he knows the ancient secret of life. This is thus proven when he shows them a goblin-like puppet that moves on its' own without any wires or strings. He then teaches Toulon the method, which he then uses to bring his own puppets to life, making Toulon popular with his audience.

The second origin that is given in the series is in Retro Puppet Master. At the beginning on this film, Afzel has stolen the Egyptian secret of life from the evil god Sutekh. In retaliation, Sutekh resurrects three mummies to help him find and kill Afzel, and they disguise themselves in suits, sunglasses, and hats in order to keep their identities hidden. Eventually, they find Afzel and badly beat him up. Elsa runs up on the men and they run away. Toulon finds him as well after his show and takes him into his room. Afzel then tells him that he is actually a sorcerer and teaches him the secret of life hoping some good will come from it. Afzel's first experiement after teaching Toulon the secret is on Retro-Pinhead, who contains the soul of a beggar Toulon befriended. However, in this film, Toulon must insert a ring into the dead body of someone, then into the puppet before muttering the phrase that brings them to life (In all the other films, Toulon just simply injects them with life essence via a needle and mutters the phrase.) The mummies eventually corner Afzel, and realizing he has nowhere to run, decides to kill himself rather than give up the secret to them. Afzel sticks his hand to his chest, allowing his powerful magic to run through his body and kill himself and he later became the puppet, named Retro-Six-Shooter. 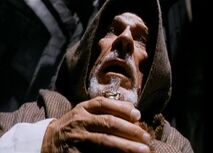 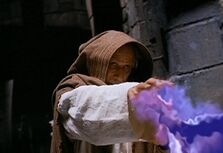 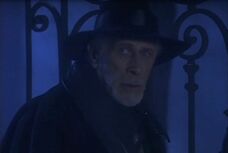 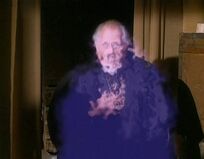 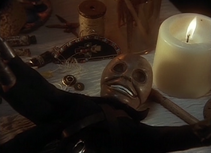 Afzel's soul was used to bring Retro-Six-Shooter to life
Community content is available under CC-BY-SA unless otherwise noted.
Advertisement