While Alice was carving pumpkins, Leech Woman climbed into one of them. Alice put her hand inside to pull out the seeds and when she pulled her hand out she was covered in leeches. Neil then put his hand over her mouth to stop her from screaming, while the leeches slowly killed her by sucking out all of her blood. After the puppets had killed all of the other girls Neil decided not to use them as his test subjects after all as he was disappointed in the way the puppets carried out the murders, meaning that their deaths had all been a waste. 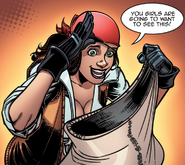