The diary is Andre Toulon's personal journal he had used to record all of the important events in his life, the puppets and the use of Egyptian sorcery. He had started writing the journal in Paris, France during 1902 and when he moved to Berlin, Germany during the 1940's he continued to add more to it. When Toulon escaped to America at the Bodega Bay Inn he hid the diary in the puppet trunk before he commit suicide. Many others had found the diary after including Danny Coogan, Neil Gallagher, Megan Gallagher, Alex Whitaker, Dr. Magrew, Cameron Phillips and Rick Myers. Rick was murdered by Maclain an assassin that was looking for the secret that sets the puppet's souls free so that they can die in peace, she was looking for the diary, but Rick had sent it and the puppets to Peter Hertz for safe keeping and Peter had sold the diary to a collector. Maclain tracked down the collector who purchased the diary and murdered him and stole the diary and read through it but she didn't see it as any use and proceeded to burn it. Robert Toulon also owned a larger version of the diary. 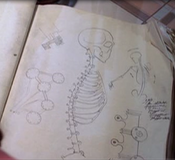 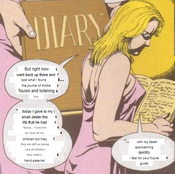