The Autogiro (also known as Autogyro) puppets were built and manufactured by Andre Toulon (The Littlest Reich timeline) after he had relocated to Germany in either 1931 or 1932. During this time there was a great fascination with flight all around the world and it inspired him to give this puppet the ability of flying with a spinning propeller hand, which can also act as a weapon. Toulon had built these puppets to sell as children toys.

The Autogiro puppets are anthropomorphic take on an Autogryo flight craft. These puppets have landing skids in the place of legs and have the torso, head and left arm of a robotic humanoid.

The hand is in the shape of a fist and the head has eyes that light up red. On the tip of its right arm are propellers which give it the ability to fly by spinning them while its arm is extended in the air. 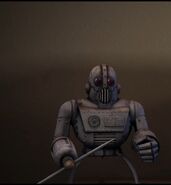 how the autogyro puppet fly 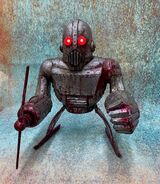