Puppet master Wiki
Register
Don't have an account?
Sign In
Advertisement
in: Characters, Deceased, Soul of a puppet,
and 4 more

The Beggar is a homeless man who is friends with Andre Toulon. He often scams Toulon's customers by exaggerating and coughing so they will give him more money. When his sickness got worse, Toulon gave him some money. Toulon later found him dead outside his theater, he used Afzel's magic and put his soul into Retro-Pinhead. He was the first person to become one of Toulon's puppets.

Begging for money in front of the Theatre Magique 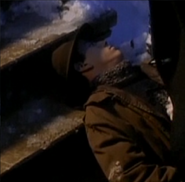 The beggar dying from the cold weather

Toulon taking the body outside to bury it