View source
The Bodega Bay Inn is a hotel at the California, Coast in Scarab Hill. The building was built by an eccentric woman who fell in love with an Egyptian mystic who designed the hotel as a nexus of the spiritual energy. The hotel was owned by Megan Gallagher's family until they died and it was passed onto her.

The hotel is where a number of events happen in the Puppet Master franchise. The first scene of the first film opens at the inn, showing the great Puppet Master Andre Toulon caring for his animated puppets. It is later revealed he is hiding there from the Nazis, who eventually find him, though not before he can kill himself to keep the secret of life from them. 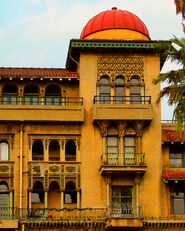 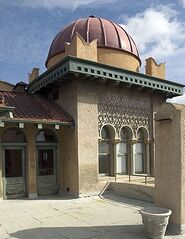 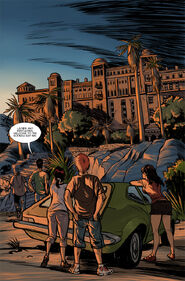 Pinhead on the roof

Andre Toulon's Hotel Room is a room in the Bodega Bay Inn hotel that Andre Toulon stayed in when he escaped to America during the second World War. The room is decorated with many puppet marionettes, posters and Egyptian artifacts. There is also a secret hiding place that he had made in the wall that only he and Danny Coogan, a disabled carpenter who worked at the hotel knew about. In this room Toulon listens to music and is peaceful with his puppets, he would even let Blade roam around the hotel. Toulon had supplies and his wife Elsa Toulon's dress sent to him while he was living at the hotel from his friends in Berlin. He also stayed in contact with his friend Peter Hertz by writing to him from this room. When two Nazi spies Max and Klaus track down Toulon they go to his room to assassinate him, but Toulon knew they were coming and was warned by two of his puppets (Blade and an Oriental Puppet) and hid all of his living puppets in their trunk in the secret hiding place. He then put a revolver to his mouth and committed suicide. The two Nazis broke down his door but they were too late. They tore the place apart but could not find the puppets so they left. Danny Coogan heard the gunshots and entered the room to see if Toulon was alright but he found Toulon's corpse. Toulon was buried at the Shady Oaks Cemetery which was located in the backyard of the hotel and Danny took the puppets out of the hiding place and took them home on an adventure. The room remained a crime scene and everything was left exactly how it was when Toulon died.

It is unknown how the puppets returned but many years later (roughly the late 80's) an evil man named Neil Gallagher and a psychic Frank Forrester had been studying ancient Egyptian magic, Andre Toulon and the Nazis and he had found evidence that Toulon had living puppets and discovered the secret of life and tracked him to the hotel. Neil met the owners of the hotel and their daughter Megan and he won over her heart by making false promises that he would invest his time and money into making the hotel better, and they married. This gave Neil access to the hotel and he hired a wrecking crew to demolish each room one by one so he could find the puppets and the secrets of Toulon. When he finally found the right room he shut himself off in the room spending hours a day studying it. During this time he murdered Megan's parents to use as his experiments. He then called Frank and the other psychic team (Dana Hadley, Carlissa Stamford and Alex Whitaker) to the hotel and bought Toulon's puppets to life and ordered them to kill the psychics. He was worried they would tap into the fact he had learnt Toulon's secrets and didn't want them to steal it from him. He shot himself in the head and commanded the puppets to resurrect him after they had killed them all.

The Oriental Puppet warning Toulon that the two Nazis are coming

Blade knocking on the door with his hook

Toulon hides his puppets in the hiding place in the wall

The two Nazis (Max and Klaus) kick down his door

Max and Klaus search for the puppets

Danny Coogan finding the puppets in the secret hiding place

Alex Whitaker and Megan Gallagher look around in Toulon's room many years later.

As seen in the Action Lab Comics, Issue #1
Toulon's Laboratory was a makeshift lab in the attic at the Bodega Bay Inn hotel that Andre Toulon had created after the puppets had resurrected him from the dead. The lab was completely made out of wood and lit with candles. Toulon had built special passageways for his puppets to gain access to the room without being seen. Toulon also decorated the room with various marionettes and posters, including a poster from the 1912 Cairo Faust show.

During this time Toulon was a soulless, confused creature and conducted all kinds of strange experiments. It was in this laboratory that he had created and conceived the Torch puppet. It would seem that Torch was bought to life by a different method than the other puppets. Toulon chanted a strange spell which made the room light up in flames before Torch came to life. His other experiments were a soul transference in which he hoped to transfer himself into a mannequin's body. To make this possible he needed human brains so he sent his puppets on a killing spree to bring him the ingredients.

When Toulon met Carolyn Bramwell a parapsychologist who was working in the hotel, his damaged, decomposed brain thought that she was his beloved wife Elsa Toulon reincarnated and kidnapped her so that he could transfer her soul into a mannequin and they could live forever. He first conducted the experiment on himself by slitting his throat and bleeding into the mannequin's mouth which made him reborn in the new body. He started to squeal like a pig because the puppets were not able to find enough human victims so they settled for farm animals. The puppets realize that Toulon's corruption has gone too far so Torch put an end to it by burning him to death. 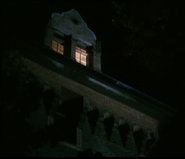 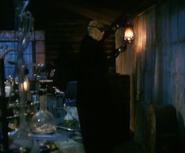 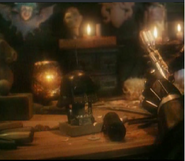 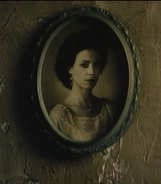 The Shady Oaks Cemetery is a graveyard that is in the backyard of the Bodega Bay Inn hotel. After Andre Toulon was pursued by the Nazis and shot himself during World War 2, his body was buried in this graveyard. It is also asumed that Neil Gallagher and the group of psychics that were killed were also buried there. When the puppets grew very weak, they murdered Megan Gallagher, the former owner of the hotel so that they could use her brains to resurrect Toulon. Though the puppets did not expect their former master to be a soulless rotting zombie. Patrick Bramwell a parapsychologist made photos of the cemetery and Toulon's unearthed coffin.

The Golem, one of Toulon's unfinished creations was also buried here. 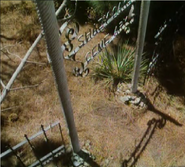 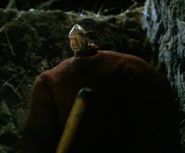 Leech Woman in the cemetery

The puppets looking into Toulon's grave

Zombified Toulon rises from his grave 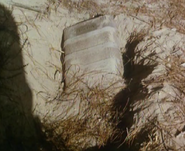