Captain Brooks was an American soldier that was serving in World War II that was caught in gunfire by the Germans and after a bullet grazed the side of his face he hid under the corpses of his platoon to escape death. After this he was discharged against his will from the army and shipped back home where he was listed as shell shocked. While in America he still wanted to do something productive for the war so he assisted General Kip Hansard in tracking down a Nazi hiding out in California, but he arrived a few minutes too late and spy had shot and killed two people (Danny and Beth).

After killing the spy he had been assigned to take a puppet trunk from the bodies and take it back to Kip, there he discovered that the American army had been tipped off about the Nazis using the occult to give life to their own puppets and had successfully killed another American general and six citizens and he needed Brooks to work with a team of psychics lead by Dr. Ivan Ivanov to find out how the puppets work so that they can use the magic inside of them to help the American war effort. Brooks was not happy with this assignment as he didn't like being told what to do by a Russian 'dwarf' and also didn't believe in living puppets or psychic phenomena. While he stayed with them he quickly began to gain their respect and believe in their powers, after Ivan's daughter had read his thoughts and brought back his horrific war incident.

A few days after he had settled in with the psychic group, there was an explosion in a power station that had knocked out all of the power to the city, so they, along with Blade, Tunneler and Leech Woman went to the location to investigate. While they were there they were ambushed by Sturmbahnfurher Krabke, who was a psychic Nazi with stronger powers than any of them and he had used magic to stun them all to the ground. After this they were rescued by Leech Woman who had spat a leech onto his eye which allowed them to all escape and regroup. When they had returned home they had discovered that Ivan's daughter had been kidnapped and the psychics used their powers to trace her location, which was an old mansion that a large group of Nazi spies were hiding. Brooks, with the help of the puppets had raided the building and shot and killed as many of the Nazis as possible, before coming face to face with Krabke again, who had used his powers to paralyze him to the ground, but he was saved when Pinhead grabbed Krabke by the throat and choked the life out of him. After killing most of the Nazis, they had returned back home where they placed the puppets into the trunk to rest.

The following years Brooks would go back into the battlefield and serve again as he had earned his placement and no longer had any anxiety. 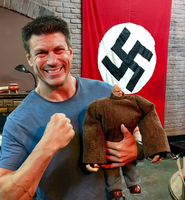 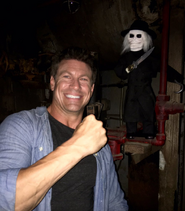