Cameron is one of the four main characters in Puppet Master 4 . In the film, Cameron is depicted as both a protagonist and an antagonist, which makes him the only character in the movie to be both. Cameron is also a former colleague of Rick Myers , who he has a rivarly with in a majority of the film. Cameron is portrayed by American actor Ash Adams.

Cameron first appears in the film visiting Rick Myers at Bodega Bay Inn along with Suzie and his girlfriend Lauren. Cameron then talks about how smart Rick Myers was in school, breaking a majority of the records that Cameron set.

Cameron also is seen to have a bit of a very sarcastic attitude, with most of his sarcasm and insults going towards Rick, who he's shown to have a bit of a rivalry with due to how successful Rick has been all his life, and how Cameron has had to work for everything he's ever accomplished.

Cameron, however, wants to one-up Rick by getting Toulon's secret and giving it to Omega before he can. Cameron manages to manipulate Lauren (who is a psychic) into using the strange gameboard they found earlier in the film to communicate with Andre Toulon.

However, unbeknowst to both Cameron and Lauren, they let out more of the Totems since the glowing pyramid in the center of the gameboard is a conduit between the mortal world and the underworld.

Cameron and Lauren manage to escape the room and flee the hotel by car, leaving Rick and Suzie behind. The car doesn't start, and Cameron forces Lauren to get out and push it, which she reluctantly agrees to do. Cameron is killed when he is attacked by a Totem while Lauren is outside of the car.

Cameron is also shown at the beginning of Puppet Master 5: The Final Chapter during the flashback sequence with Rick's narraration. 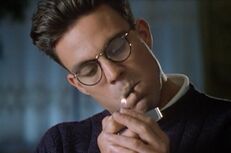 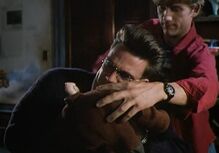 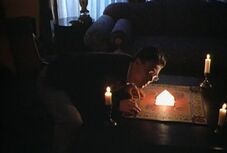 Cameron preforming a ritual to try and contact Andre Toulon 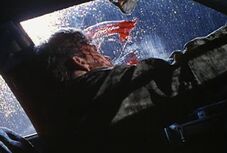 Cameron getting killed by a Totem 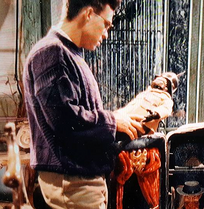