Dean is teenage boy who is the son of a man who was fired from the Bodega Bay Inn by Megan Gallagher during the time she closed the hotel down so that Neil Gallagher could search for Andre Toulon's secrets. The following October, after the events of the first Puppet Master movie, Megan is now the master of the puppets and a group of teenagers are having a Halloween party in a cave near the Bodega Bay Inn and Dean has an idea to get revenge on Megan for firing his father by wearing monster costume and sneak into the hotel through an open window and scare Megan.

When he does do this, however he is attacked and killed by the puppets. The puppets assume it is some evil force sent to kill them or their master, but when they remove the mask it is revealed to only be a teenage boy. The puppets drag Dean's corpse down to the cave to hide it, and it is there and Dean's friends witness the puppets and the body. The puppets kill all of his friends too and Megan was asleep the whole time. The next morning she explained to the puppets about how she use to have Halloween parties in the lobby of the hotel and was sad that nobody came to the door that year, but she had no idea about what had happened that night or the bodies of the teenagers in the cave.

Dean in his monster costume 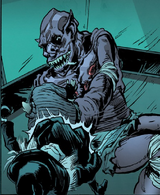 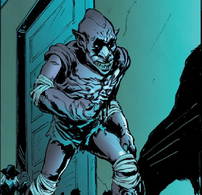 Dean running from the puppets

The puppets unmask Dean after killing him, revealing it to be a teenage boy and not a monster after all
Community content is available under CC-BY-SA unless otherwise noted.
Advertisement