Dianne Whitaker is the sister of Alex Whitaker (Eternity Comics timeline), who had formed a lesbian relationship with Megan Gallagher.

A year after Alex had survived and returned from the Bodega Bay Inn, where Neil Gallagher had commanded Andre Toulon's puppets to slaughter all of his psychic colleagues, he had stayed with his sister Dianne in Connecticut, where he began to have reoccurring nightmares of those horrific events. During this time Dianne had tried her best to comfort him from his night terrors, but one night she was unable to do that as she had to visit their mother in New York. While she was away the puppets had hid in the cargo of a train that went by their town and had jumped off and located where Alex was staying and broke into the house and decapitated him. They had recently been abandoned by Megan at the hotel and were searching for her in a revenge attack and had even killed Virginia Grey, who was the new owner of the hotel. After Dianne had read the news article about Grey's death and then discovered Alex's corpse at her home she had immediately knew that the puppets were involved and had raced to Megan Gallagher's house, that was only a short distance away form her own.

When she had arrived Megan had told her the whole story about Neil and the puppets and because they both had a shared grief they had decided to comfort each other by forming a lesbian relationship and making love with each other. While they were doing this Blade had climbed to the top of the telephone pole and had severed the wires which had created a power cut in their house. At first Dianne and Megan had just assumed it was a typical power problem and had resumed making love but then they heard the window break and saw Blade, Pinhead, Torch, Leech Woman and Jester climb through the window, who then began to chase after them. Blade had managed to injure Dianne by cutting the back of her leg and then the two woman ran outside to drive away in their car but they noticed that the tires had been cut and Megan's dog Leroy (That had contained the soul of Neil) had also been murdered by the puppets moments before.

After this they had attempted to call for help but had noticed that the phone line had been cut and then Pinhead had ambushed Dianne and grabbed her around her throat and began punching her, but she was rescued when Megan had pulled out a shotgun and hit him with the end of it, she then fired at the remaining puppets, which had sent them scattering down the stairs. After this Torch had fired a shot at them, which had caused the entire house to engulf in flames and they had ran up to the attic and slammed the door shut. After this Dianne and Megan had jumped out of the attic window and slid down the porch to safety and they had watched as the puppets desperately tried to escape out of same window, but it had been shut and locked and they were all seemingly burnt to death inside. 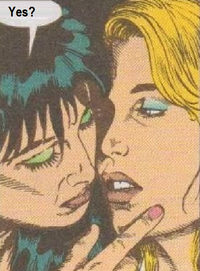 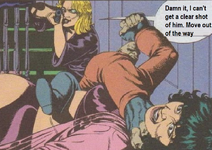 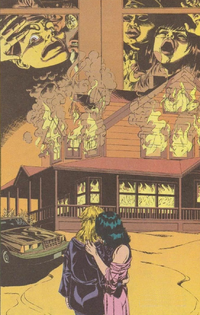 Dianne and Megan watching the puppets burn inside a house