Dr. Hess is a German surgeon who is working under the Nazis to create undead super soldiers to fight in the war. He sets out to obtain Andre Toulon's animation secrets without having him harmed. He got stabbed and killed by a Nazi soldier after betraying the Nazis and helping Toulon escape. His soul was placed into the Blade puppet by Toulon.

In 1941, in World War II Berlin. A scientist named Dr. Hess is forced by the Nazis, especially his Gestapo liaison Major Kraus, to create a drug capable of animating corpses to use as living shields on the battlefield after losing too many on the Eastern Front. But, Dr. Hess cannot get it right: While the corpses do reanimate, they have a tendency towards mindless violence. In a small theater downtown, Andre Toulon has set up a politically satirical puppet show for children, starring a six-armed American Old West puppet named Six Shooter, who attacks an inanimate reconstruction puppet of Adolf Hitler. The show is, next to a crowd of children, also attended by Lt. Erich Stein, Kraus' driver. After the performance, Toulon and his wife Elsa feed the puppets with the formula which sustains their life force, but they are watched by Stein, who informs his superior the next morning. Hess, genuinely fascinated by the formula, wants Toulon to freely share the secret with him, but Kraus wants to take Toulon in for treason.

The next day, Andre gives Elsa a puppet crafted in her likeness as a gift, but soon afterwards Kraus, Hess and a squad of soldiers break into the atelier and take Toulon, Tunneler, and Pinhead. When Elsa attempts to prevent them from taking the formula as well, she is shot by one of the escort, and Toulon is dragged away from her. When Kraus prepares to leave, the wounded Elsa spits at him in defiance, and in retaliation, Kraus cold-bloodedly shoots her dead. However, while transporting Toulon off, the two soldiers guarding him are killed by Pinhead and Tunneler, enabling Toulon to escape.

After hiding for the remainder of the night, Toulon returns to his theater to find that the stage has been burnt by the Nazis. He finds Six Shooter and Jester and leaves with them, then discovers a partially destroyed hospital and decides to set up camp in it. Toulon wants revenge, so he, Pinhead and Jester break into the morgue to get his wife's life essence and inserts it into the woman puppet he made for her, and as she comes to life, he inserts several leeches he found in a jar into her. Later that night, Toulon carries out the first revenge attack on Stein while he fixes Kraus' car, along with Pinhead, Jester and Leech Woman, and on his flight from pursuers Toulon subsequently finds shelter in a bombed-out building.

Back in his lab, Dr. Hess is studying Toulon's formula, and desperate to meet and talk with him, he goes back to the old theater. Meanwhile, some friends from the puppet show, a boy named Peter Hertz and his father, find Andre and decide to live with him after Peter's mother was arrested on charges of espionage. The next day, Toulon sends Six Shooter to kill General Müller, the supervisor of the Nazi reanimation project, while Müller is visiting a brothel. While Six Shooter manages to kill the general, Müller shoots off one of the puppet's arms beforehand. Peter goes back to Toulon's old atelier to look for a replacement arm and is caught by Dr. Hess, who treats him kindly and gets him to take him to Toulon.

Dr. Hess finds and talks to Toulon, who tells him about the puppets' secret, and the two become friends. But Peter's father betrays Toulon by telling Major Kraus about his hideout in exchange for a pardon for his family. Kraus and his men storm the ruin, but the puppets fight back, enabling Toulon and Hess to escape. Kraus stops Peter and his father, demanding to know where Toulon is; Hertz fights against and is shot by Kraus. While searching the nearby houses, one of Kraus' men is shot by Six Shooter; but when Hess approaches him, the soldier puts a knife into him before expiring. Hess dies from the injury, telling Toulon to keep fighting. Toulon returns once more to his old theater, where he falls asleep from exhaustion and is soon joined by the now orphaned Peter.

At night, Major Kraus returns to his office, only to fall prey to an ambush by Toulon and his puppets, now joined by Blade, infused with Hess' essence. Toulon takes terrible revenge on Kraus by hanging him from the ceiling by his limbs and neck, which are impaled by sharp hooks. After having a halberd from Kraus' office decorations planted into the floor, point up, Toulon sets the rope on fire; the rope eventually snaps, and Kraus falls fatally right onto the halberd. The film ends with Toulon, posing as Kraus, and Peter leaving the country for Geneva on the express train. 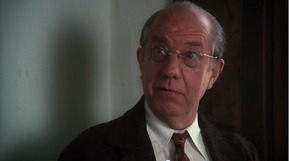 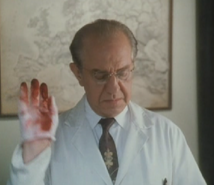 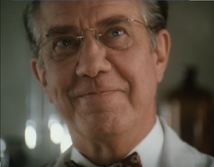 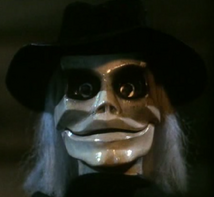 Blade has the soul of Dr. Hess 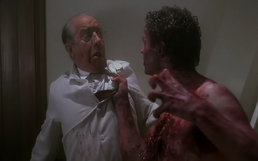 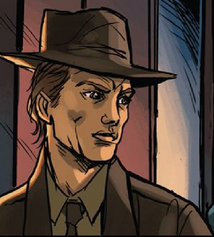 Dr. Hess after his spirit was transferred into Dr. Holland (Action Lab Comics)
Community content is available under CC-BY-SA unless otherwise noted.
Advertisement