Dr. Jenn's puppet is a female Jester puppet that contains the soul of Dr. Jenn and Camille Kenney and similarly to Dr. Jekyll and Mr. Hyde, this puppet has a double personality which can switch from each one by spinning her head. Madam Adon's puppet and Anapa's puppet created this puppet and placed both of their souls into it so that it could assist them on getting revenge on Anthony Gallagher and Andre Toulon's puppets.

She looks like a female version of Jester. Her outfit is either a rainbow pattern or pink with red stripes and she has a pink jester hat with a feather sticking out of it. She is capable of spinning her head and changing the appearance of her face. One of her faces is Dr. Jenn's personality and it looks very similar to how she looked in life with glasses and long ginger hair and her second face is Camille's personality, which looks like Jester but with pink lipstick and long eyelashes. 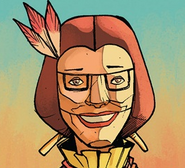 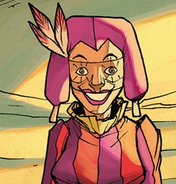 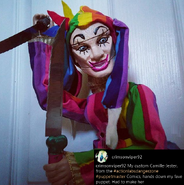 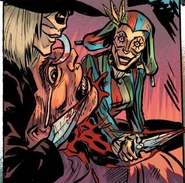 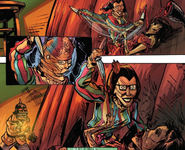 Torch burning the puppet to a crisp