Dr. Lawrence Jenning is the scientist who wants to get rich from Andre' Toulon's puppets by selling their secrets to the open market. He got attacked by the puppets and fell 40 ft. on to the top of the old-fashioned elevator shaft.

Rick Myers has been arrested under the suspicion of having caused the murders of Dr. Piper and Baker, but Dr. Jennings, the new director of the Artificial Intelligence research project and Rick's temporary superior, gets him out on bail. Blade has been confiscated, but he escapes from the police department's evidence room and jumps into Susie's purse as she comes to fetch Rick. Lauren lies comatose in the hospital following the events in the inn. Meanwhile, in the underworld, Sutekh decides to take matters into his own hands and infuses his life essence into his own Totem figure, named Dark Totem.

While Jennings professes skepticism toward Rick's story, he becomes actually quite interested in acquiring Toulon's secret, especially since the project's unofficial sponsors are luring with a sizeable contribution, should he succeed in presenting a prototype soon. Jennings returns to the Bodega Bay Inn with three hired thugs to collect the puppets and the formula, but in the meantime Rick is aroused by a nightmare and finds Blade by his side. Sensing that something is about to happen, Rick and Blade depart for the hotel. Susie, while paying a visit to Lauren, witnesses her friend receiving a vision of Sutekh and his Totem. Unable to contact Rick, she proceeds to the hotel as well.

Jennings and his hired helpers soon encounter the puppets hiding in the hotel and Sutekh's Totem, which kills the thugs off one by one and drains their life away. The puppets engage Sutekh's Totem in combat, but its power is greater than its predecessors and they are unable to harm it effectively. When Rick returns to his old room and attempts to start his computer, he finds a call for help being transmitted through it. Gradually, he is joined by the puppets - Six-Shooter, Pinhead, Tunneler, Jester and Torch -, Jennings and Susie, but the Totem begins to pursue them. Back at his computer, Rick finds Lauren contacting him through the device, giving him the formula and pleading him to revive Decapitron to destroy Sutekh.

Rick, Susie and Jennings proceed to revive Decapitron, and Toulon advises them to leave the hotel while the puppets will engage Sutekh. Jennings, however, insists on taking one of the puppets with him, despite Rick and Susie's warnings. Jennings pretends to relent, but as they prepare to leave the inn, he attacks Rick and Susie. Locked in the hotel's elevator going upward, Rick and Jennings struggle. Jennings clubs Rick into unconsciousness, but as he exits the elevator, the puppets move in on him and force him back into the shaft, with the elevator running down again; as a consequence, Jennings falls to his death. 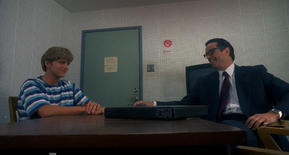 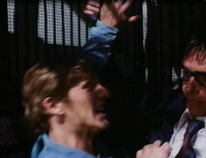 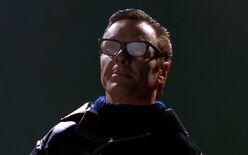 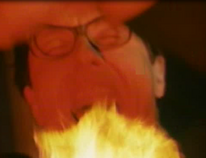 Torch attacking Dr. Jennings before he fell down the elevator shaft to his death