Dr. Magrew is the primary antagonist and the Puppet Master in the film Curse of the Puppet Master. Magrew runs the House of Marvels, a doll museum where participants can pay and come see the puppets live in action. Despite his name, he is not actually a real doctor but considers it more of an honorary title. Magrew thus far is the only Puppet Master to kill a human victim on his own. He is portrayed by actor George Peck, and only makes an appearance in this film, although he is shown in archival footage in Puppet Master: Legacy .

At the beginning of Curse of the Puppet Master, he is seen stuffing something in a crate and promises the puppets that things will be different next time. Magrew then drives into the woods, where he douses the crate in gasoline and lights it on fire, while faint screaming is heard from the crate (Later, this turns out to be the Matt puppet which is found by Magrew's daughter, Jane .)

At a gas station, he meets a young man named Robert who he stands up for against town bully Joey Carp. However, upon finding out Robert's talent for wood carving, he hires him as a puppet maker at House of Marvels. Magrew believes that Robert can build a puppet that can sustain life just like Toulon's puppets could, and gives him the blueprint to the ultimate creation.

At his show however, he is suspected of murder by Sheriff Garvey and Deputy Wayburn. Despite the fact he pleads innocence, they don't believe him (This turns out to be true later on, as it is revealed in the climax of the film that Magrew hires young men to build puppets for him, then takes their souls and puts it into their new creation.)

Magrew soon turns the puppets over to evil after town bully Joey Carp breaks Pinhead's right arm and hand after he attacked Joey when he tried breaking in Jane's room. He takesTunneler and Blade with him, and Blade slashes Joey's forehead while Tunneler drills into his crotch, killing him.

Magrew's fondness for Robert(Tank) quickly sways when he sees him leave Jane's room. Becoming angry when told that Jane and Robert were developing a relationship. Magrew protests saying that they are just kids, and that he doesn't want to see her get hurt. Five days later, Robert falls ill and Magrew has Jane go pick up something from town while he waits with Robert for the doctor (Which turns out to be a ruse so he can get rid of Jane to kill Robert.)

Magrew then puts Robert's soul into the new puppet named Tank . Doing so, it causes Blade and the other puppets to turn on Magrew because they liked Robert a lot after he repaired Pinhead. Blade leads the attack, slashing up Magrew while Pinhead hits him with a metal pipe. Magrew is near death when his daughter Jane arrives back home, but then the final attack is by Robert (who is angry because of Magrew killing him) and he projects a beam of electricity between Magrew's eyes, killing him for good. 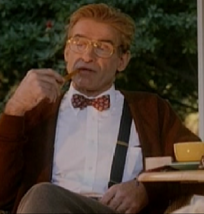 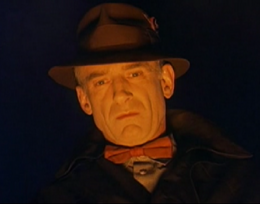 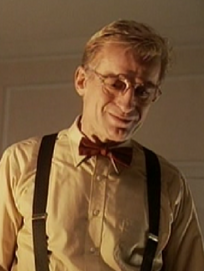 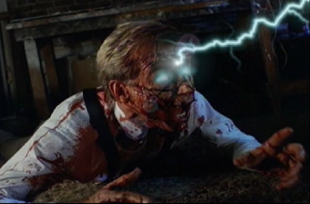 Dr. Magrew being murdered by Tank
Community content is available under CC-BY-SA unless otherwise noted.