Elisa Ivanov is one of the psychic people who worked for the American government during 1942 alongside her father Ivan and a voodoo priestess named Georgina Vale. Elisa is a clairvoyance psychic which means information comes to her while she is asleep and dreaming (similar to Alex Whitaker).

Elisa dreams about Dr. Freuhoffer's puppets and warns the rest of her group about them and she also has dreams about Captain Brooks past where he was injured in battle and hid under bodies of his fellow soldier's so that the enemy could not see him.

She also tells Brooks about how her mother was captured by the Gestapo during one of her father's lectures about psychic abilities. Her mother was then forced to work for the Gestapo using her psychic abilities to help them win the war. She is later kidnapped by Doktor Gerde Ernst and the rest of the Nazis during that time she dreams of a prediction about the end of the war. She is eventually saved by her father.

Elisa had became a war journalist and she took Blade with her on a mission to stop Dr. Hauser, who is an evil Nazi surgeon that was hiding out in Los Angeles, and he she hoped to prevent him from creating an army of zombies. 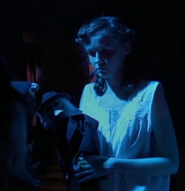 Elisa waking from one of her psychic nightmares
Community content is available under CC-BY-SA unless otherwise noted.
Advertisement