The Elite Guards were five men and one woman who protected the Peterstown cult from intruders. They were also the chosen ones of the community and given special privileges of being the first people that the cult would transfer into new mannequin bodies, similarly to how Andre Toulon had done on himself after his corrupt resurrection. The entire cult was obsessed with Toulon's legacy and the elite guards were dressed as Six-Shooter, Jester, Blade, Leech Woman, Tunneler and Pinhead and the mannequin bodies that they were to be placed in were 6 foot versions of these respected puppets.

On the day of their new life, all of the citizens of the town would gather into a tent and watch as the Elite Guards cut either their wrists or throat and then bleed into their new mannequin bodies. After this, the leader of the cult Isaac would perform a magic ritual to give them their new life. Not much is known what happened to these mannequins, other than Toulon saying it had "ended badly for them". Toulon had been a witness at the cult in the form of a new body. He had arrived there a few days prior to spy on the cult and the Elite Guards had found him sneaking around the grounds and knocked him unconscious. 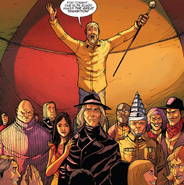 The guards with Isaac

The guards performing their soul transference in front of an audience

The guards bleeding into their mannequin bodies

Their new bodies
Community content is available under CC-BY-SA unless otherwise noted.
Advertisement