Erich Toulon is the son of Elsa and Andre Toulon that they had in Berlin during the 1930's. Erich grew to resent his family, possibly because they were too busy touring the world and participating in puppet performances, that he began to rebel against them and ran away and joined Adolf Hitler's youth.

During April, 1941, after Andre had killed Major Kraus and was fleeing the country to get away, he was stopped by Erich, who had a flamethrower and he commanded him to get on his knees. Andre was saved by Blade, who ambushed Erich and slit his throat. After Erich's death, Andre kept some of his blood and brain matter in a jar, so that he could revive him later on. He was eventually revived in the form of Torch after Andre's resurrection in the early 90's.

In the 2010's the puppets had found out that a fortune teller known as Madam Adon had the ability to transfer people's souls into human bodies and they had made a deal with her to place to do this for them. Adon asked them to find humans in the city and kill them and bring them back to her so that she can carry this out. Torch found a young blonde boy, that loosely resembled how he had looked while he was alive.

After their transformation was complete, the puppets, now in their new human bodies, allowed Adon to keep the puppets for her store. Adon then allowed clients who came to her store to temporarily place their bodies into Toulon's old puppets so that they can exact revenge on enemies. She commands these clients to track down and kill the people who use to be the puppets, and after doing this all of their souls are sent to the Underworld.

Erich builds a makeshift flamethrower and torches down Adon's store in revenge, and then commits suicide. When his soul arrives in the Underworld he explains that he had been having nightmares sent to him by Anapa, the son of Sutekh, and he was willing to make a deal with him if his and his friend's souls can be set free. After Anapa agrees to this, he places their souls back into their old puppet bodies and are put on a mission to complete seven tasks. The first thing that they do when they return to their puppet's bodies is kill Adon. Anapa then places Adon into a skeleton puppet so that he can use her as his pawn. 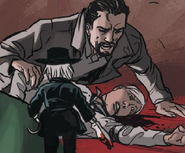 Blade killing Erich shortly after the events of Toulon's Revenge

Erich during his rebirth making a makeshift flamethrower arm

Erich's suicide during his rebirth
Community content is available under CC-BY-SA unless otherwise noted.
Advertisement