Faust is a German folklore story that is about a scholar who is highly successful yet dissatisfied with his life, so he decides to make a pact with the Devil, exchanging his soul for unlimited knowledge and worldly pleasures. In response to this the Devil's personal assistant, Mephistopheles appears. He makes a bargain with Faust; Mephistopheles will serve Faust with his magic powers for a set number of years, but at the end of the term, the Devil will claim Faust's soul and Faust will be damned for all eternity.

In 1912, when touring in Cairo, Egypt Andre Toulon and his wife Elsa put on an adaption of this play. The Mephistopheles puppet moves without strings and without a human controlling it, it's never revealed if this puppet was alive or Toulon was using another form of magic or trickery to produce this effect. A mysterious Egyptian wizard who is in the audience, sets fire to Toulon's show and then invites him to his tent to exchange an ancient Egyptian secret which will change Toulon's life forever.

After Toulon's Mephistopheles puppet was burnt, he kept the head and in 1941 he may have recycled it and used it for his new Blade puppet.

It is possible that Toulon did another Cairo show many years later, as Rick Myers discovered another Faust poster, this time depicting Toulon as an older man with a beard. It is also possible that this poster was painted for him as a tribute by a friend or a fan in Berlin. 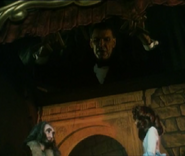 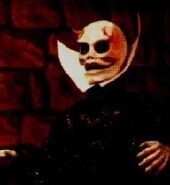