General Müeller is the leader of the Gestapo Nazis in Berlin, Germany.

Müeller watches over Dr. Hess and Major Kraus and their Deathcorp Project and is angry at Kraus for killing Elsa Toulon straight away and wanted her alive to help get more information out of Toulon. Müeller seems to care more about using his powers to flirt with prostitutes than he does about his work.

Müeller has a confrontation with Six-Shooter, and they shoot at each other like in western movies but Six-Shooter out-guns him and shoot him many times, he then falls out of a window and dies.

In the Eternity Comics, Müeller sends Hans Faulhaber and Captain Fritz Loemann to the Toulon Residence to arrest André Toulon for mocking Adolf Hitler, where they brutally beat him and kill his wife, Elsa. Toulon then brings Blade and Leech Woman to life and sends them into a car where Mueller and his mistress Brunhilde are having sex and Blade kills Mueller by cutting his throat. 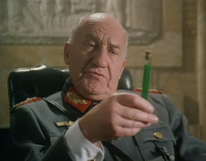 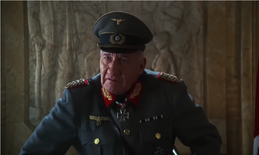 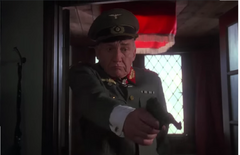 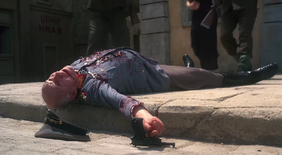 Müeller after Six-Shooter murdered him. 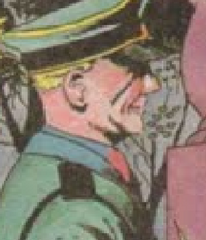 Müeller in the Eternity Comics 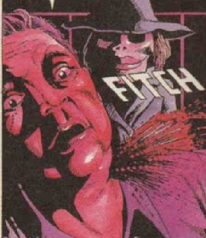 Müeller's death in the Eternity Comics
Community content is available under CC-BY-SA unless otherwise noted.
Advertisement