Georgina Vale is one of the psychic people who worked for the American government during 1942 alongside Elisa Ivanov and her father Ivan. Georgina's magical powers involve voodoo spells to ward off evil but she is also capable of doing sexual magic (similar to what Frank Forrester could do). One of her main roles for the group is performing rituals on their hideout to help mask its presence from their enemy's psychic abilities.

She also uses a spell by waving a chicken's foot in the air so that she can pick up on psychic traces left behind by their enemy, during one of these spells Sturmbahnfurher Krabke ambushes the group and attacks them with his psychic powers. She is killed by Bombshell's machine gun breasts shortly after seducing a Nazi guard, long enough for Leech Woman to kill him. 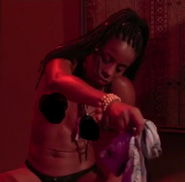 Georgina using her powers to protect their hideout

Georgina after being killed by Bombshell
Community content is available under CC-BY-SA unless otherwise noted.
Advertisement