Grashüpfer is an insect puppet from Puppet Master: The Littlest Reich. It is unknown why Andre Toulon (The Littlest Reich timeline) had made these puppets, but they were crafted sometime between the 1920's and the 1940's and were mass produced and sold to people all over the world in a mail order plan during the 1980's. This puppet is first seen during the 30th Anniversary of the Toulon murders convention at the Postville Lodge, where the guests had taken puppets to sell at the auction. During the night at the hotel Toulon had woke all his puppets up using a dark power from beyond the grave and they had all embarked on a killing spree across the grounds of the hotel. During this time this puppet had been flown in to the kitchen of the hotel by an Autogiro puppet as re-reinforcements as the guests had successful killed a Junior Führer and Mechaniker puppet, and after the guests that were hiding in the kitchen had seen them entering they had ran away to hide elsewhere.

The puppet is later seen as a Pinhead puppet punched a large hole in the door to a hotel room and it had crashed through it and had used its hopping power to jump through and had landed on Markowitz back and injured him. It had then lunged at Edgar and attempted to claw at his face with its sharp claws, but he had managed to pull the puppet off and throw it into a safe and lock the door which had kept it imprisoned. This puppet is seen again, also with a Pinhead puppet and trying to break through an office door where an injured Detective Brown and Howie were hiding. It is unknown if this is the same puppet that had attacked Edgar, or yet another variant of it that was also in the hotel. Brown had seen the two puppets trying to enter the room and he had fired a few shots at the door and had successfully hit the Pinhead puppet. Howie had figured out that the puppets were targeting people that the Nazis had disagreed with so he had sacrificed himself to save Brown.

The puppet had then jumped through the hole in the door and jumped onto Howie's face. While this was happening Brown was being strangled to death by the Pinhead puppet he had shot moments before, but he was saved after Edgar had stolen a truck and crashed it into Toulon's mausoleum, which had shut down the power which animated the puppets and had caused them all to fall on the floor lifeless. Brown had then pulled the puppet off of him and walked over to check on Howie and had discovered that he was dead and the Grashüpfer's puppet's lifeless body was laying on top of him and had been clawing at his face the entire time.

The insect puppet is based on a praying mantis and a grasshopper. He has four insect-like arms and wears a dark green tuxedo suit. He has antennas, black eyes and long mantis-like legs with large dark blue shoes on the end. He is capable of bending his knees and jumping long distances. 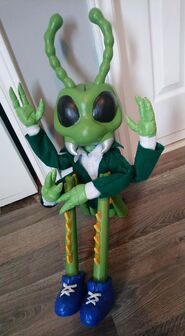