Puppet Master Halloween 1989: The Creature is one of the issues of the Action Lab Comics. It was released in October of 2016. It picks up a few months after the main events of the first Puppet Master movie and focuses on Megan Gallagher being the puppet's new master, and a teenager who breaks into the hotel to play a prank with deadly results.

on October 31st, 1989, a few months after the events of the first Puppet Master movie, a group of five teenagers are partying in a cave on a beach near the Bodega Bay Inn. One of the teenagers named Dean decided to pull a prank on Megan Gallagher by dressing up like a demon and breaking into the hotel and scaring her. He planned to do this because his father was fired by her. The reason her father was fired was because it was during the time Neil Gallagher closed the hotel off so that he could search for the puppets.

Dean broke into the hotel as he thought Megan was living there alone, but she had become the puppet's new master and they were guarding the hotel in her protection. The puppets ambushed and killed Dean as they amused he was a real demon from the looks of his costume. After the puppets unmasked him and realized he was just a teenage boy, they dragged his body down to the cave to hide it. In the cave were his four friends who were terrified at seeing the puppets dragging the corpse of their friend. The puppets then killed the other four teenagers and returned to the hotel. The next morning Megan woke up and had no idea of what had even happened. 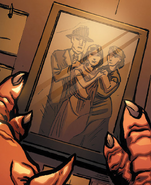