Happy Amphibian is a frog puppet from Puppet Master: The Littlest Reich. It's unknown why André Toulon (The Littlest Reich timeline) had made these puppets, but they were crafted sometime between the 1920's and the 1940's and were mass produced and sold to people all over the world in a mail order plan during the 1980's.

He has a pure white frog-like face with large eyes that are partially closed with yellow eye lids. He is wearing a blue party hat with a green fluffy ball on the top. He has large red lips, a small red nose and blue eye makeup. He wears an open blue jacket with suspenders.

He has three long green fingers and his sleeves are covered with green polka dots. He wears a green bow-tie and a white shirt. His pants are gray, striped and cut off towards the bottom revealing his green legs. He has large feet and big red and orange shoes on. There is another variant of this puppet with a purple color scheme that does not wear a hat and has slightly triangular shaped eye makeup, less defined lipstick and is seen covered in blood.

This puppet is first seen being sold online when Edgar is on his computer and looking through EBay for Toulon artifacts. This puppet is first physically seen during the 30th Anniversary of the Toulon murders convention at the Postville Lodge, where many of the guests had taken different variants of this puppet to the convention to sell at an auction.

After Toulon had used his dark powers from beyond the grave to wake up all of the puppets and sent them on a killing rampage across the hotel, there is two of these frog puppets seen, although there could have been more around. One of these puppets had belonged to Toulon's private collection and was kept in a glass cabinet at the Toulon Mansion but escaped and was presumed stolen. The first one was seen wearing a purple outfit, with purple makeup and had no hat and was viciously murdering a Bodega Bay truck driver in the front of the hotel. It is unknown how this puppet had killed him but his face was savagely torn to pieces. After this Edgar had attempted to steal the truck and the puppet had shot a poison dart out of its mouth at him, but he was able to dodge out of the way just in time. Edgar had then grabbed the puppet by its head and slammed it on the car steering wheel multiple times which caused the puppet to crumble to pieces in his hands.

A second frog puppet, this time wearing a blue outfit, blue makeup and a hat, had been spotted by Brian and Travis as they were taking drugs in their car, but it had managed to hide under a car out of sight and the two men had just assumed it was a side effect of their drug and they were hallucinating. Later on this puppet had watched Edgar as he drove away in the stolen truck and it began walking after him. This second puppet is not seen again and it was deactivated and turned inanimate after Edgar had crashed the truck into Toulon's mausoleum, which had disrupted the dark power which animated the puppets.

Dart projectile flying out of his mouth 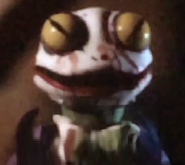 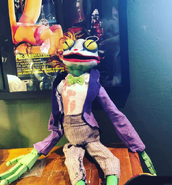 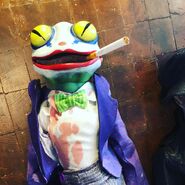