Erich Hauser (also known as Dr. Hauser or Ingenieur) is a Nazi doctor that was hiding out in California during 1945. He had received the Iron Cross medal in WW1 for his experiments and he had lost his arm from fighting in the trenches and had replaced it with a strong mechanical arm. Hauser does not like to be called a doctor and he sees himself as an engineer and is studying the elixir that was stolen from Andre Toulon in Berlin a few years prior and the lead developer on the Deathcorp Project that was started by Dr. Hess and he was a possible colleague of him before his death. Hauser was also colleagues with a network of Nazi spies that are hiding in the California area, including Max, Klaus, Commandant Heinrich Moebius, Uschi, Doktor Gerde Ernst and Sturmbahnfurher Krabke. Hauser begins his experiments by studying and trying to replicate the elixir by studying human glands and substituting fluid with pure bio-energy, but he cannot proceed as as there is a flaw in the ingredients and he is unable to find out what is missing. He had built a special torture device chair that he put in victims and began to electrocute them with electrical magnetic energy and make them die slowly as he believed that his experiments must endure excruciating pain before they die so that they are perfect test subjects, after they die he injects them with the elixir, which kills all their higher brain functions and erases their memory and causes them to be rage filled beasts and then he uses a hand held device to be able to control the bio-energy within them to be able to control their actions and use them as slaves that will carry out his and the Nazi regime's orders. Walther Prok was sent from Berlin to monitor Hauser's findings and he believes that he takes pleasure out of torturing his victims and offers him a place in the Gestapo.

Hauser has plans to unleash these unstoppable zombie slaves across London, Moscow and all over America, but most of them suffer from automatic tissue destruction and die after a few moments as there is a missing element in the elixir and Prok is unsure that these zombies can be of use to assist the Nazis as he thinks they cannot be controlled. After this Hauser shows him a test subject that is in stasis and wakes it up with his device and sends it after a Silver Legion member Alfred Muller, who tried to betray them after witnessing their experiments and he was caged inside of the hideout. Muller tried to escape but one of the successful zombie slaves is commanded to eat him alive, which impresses Prok. After this Hauser has his henchmen Lang and Klein to dispose of all the failed experiments in a nearby alleyway and district attorney James D. Madison, who is also a member of the Silver Legion, uses his customized acid gun to melt all the corpses. During this time Elisa Ivanov, who is now working as a war journalist, is having vivid psychic visions of Hauser and is able to trace the location of the corpses. A few days later Hauser shows off another test subject and this one he has got better control of by modifying its vitality and he has able to make it grip its hands around Prok's neck. During this time detective Joe Gray becomes suspicious and follows Klein to the alleyway next to the hideout and Hauser puts his new zombie slave to work by commanding it to kill him but he manages to dodge out of the way and impale it and then shoot it in the face. After this Madison and Lang hand him stolen government documents which contain a scan of the Scroll of Osiris as well as information about Elisa's psychic background and Toulon's living puppets and this is the missing key that he needed to create his own elixir but he is unable to translate the hieroglyphics that are written in Egyptian text.

It is revealed that there is a giant satellite Death Ray on the roof Hauser's building that Prok and Madison had helped fund by exploiting their power to gain resources from the American government to have enough fuel to power it and he has plans to switch this satellite on so that it will shoot out bio-energy beams across California and kill all of its citizens and then revive them as zombie slaves. He later has Elisa and Joe kidnapped and begins to torture her and demand that she translates the scroll of Osiris for him but she refuses to and she uses her psychic powers to shut down his machine. Hauser is impressed with her powers and uses his machine to try and replicate the wave form of her power so that he can channel that power into his device and use it against her. He then experiments on Barney Barnes, who is strapped on a table and transforms him into a zombie slave so he can prove his methods work to Elisa. After this Blade breaks into the hideout and embarks on a killing rampage and murders of all the Nazis inside and then Hauser tries to turn Joe into a zombie with his device, but the energy beam misses him and hits Klein instead, who then turns on Hauser but he switches the device up to maximum power which causes his face to melt. After this Joe punches Hauser, but he grabs him using his mechanical arm and throws him across the room then he attempts to use the device on Elisa but Blade sneaks up on him and then he is grabbed by his strong mechanical arm. Hauser then places Blade into a hot furnace burning him alive, which then causes Elisa to feel the pain and Hauser realizes that they both have a psychic link to each other so he grabs a sledgehammer off the wall and wants to prove that the puppets can be destroyed by striking Blade many times with it, which first causes his limbs and face to break to pieces and then with one final hit with the hammer it causes him to explode to pieces in a magical burst. Hauser then breathes in the bio-energy emitted from Blade's remains and he becomes born inside of his stomach and cuts his way out, killing him. After Hauser dies a 'dead man's switch' is activated on his glove, which causes the death ray to begin firing but Blade breaks inside of the control panel and destroys the inside, which causes the hideout to explode. After this Blade, Elisa and Joe escape unharmed.

Hauser using his device to control a zombie

Hauser torturing Blade in a furnace 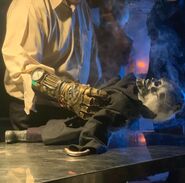 Hauser dying by being cut open by Blade from the inside