Joey Carp is a character and one of the antagonists from the film Curse of the Puppet Master . Joey is the town bully, and is often frequently joined by his friends Art Cooney, Larry, and Pogo. Joey isn't shown in much of the film, but in many of his appearances, he is seen harassing Robert "Tank" Winsley and Jane Magrew . Joey is portrayed by actor Michael D. Guerin.

When we are first introduced to Joey in the film, he is seen harassing Robert at the gas station. Joey makes fun of Robert's constant looking at the ground while he talks to him, and his constant apologies. Joey then proceeds to trip up Robert, which makes Jane and Dr. Magrew go over to stand up for Robert.

Joey then calls Jane a bitch after she tells him to leave him alone, which angers Dr. Magrew who tries to fight Joey over it, while Joey proceeds to call Magrew "grandpa". Magrew then tells Joey to hit him, but then the main worker at the gas station comes over and breaks up the confrontation, and tells Joey to leave. Joey tells Robert that he isn't done with him as he goes to leave.

Joey is next shown while Robert and Jane are going out in town on a ride. Jane runs out of the woods after seeing something that Robert found (Which is the Matt puppet). Joey and his friends are at the top drinking beer when Jane runs up.

Joey asks her what her problem is, and Jane tells him that he is and people like him. Joey then asks where this is coming from because he's being nice. Joey then pushes Jane and begins to sexually assault Jane, slapping her on the butt when she tries to get away after she slaps Art.

Robert then comes up out of the woods behind them and asks if Jane is okay. Joey tells him to leave because it's not any of his business, and Robert tells them to leave her alone. Joey punches Robert in the stomach and slaps him and calls him a "big fucking dummy."

Joey then tries to rape her, but Robert grabs Joey and slams him down on the hood of the car, then proceeds to choke him.

Later that night, Joey attemps to sneak into Jane's room but is attacked by Pinhead . Joey pulls Pinhead off and begins to stomp on him, breaking his right arm and hand.

Joey is killed by Blade and Tunneler while he is working out as revenge for his attack on Pinhead. Blade slashes his forehead while Tunneler drills into his crotch. 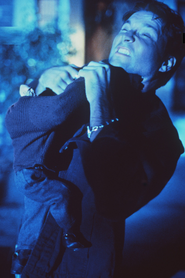 Joey working out shortly before his death