Junior Fuhrer is a baby doll toy that Andre Toulon (The Littlest Reich timeline) had built sometime during the 1940's. There is not much known about the origin of this toy, but it has the power to rip open people's backs and crawl inside of them and operate the host like a puppet or a possession.

This puppet is essentially a baby doll that is wearing a diaper, but with the face of Adolf Hitler. His eyes also glow blue in the dark.

This 'puppet' is first seen after Princess and her boyfriend Strommelson had taken it with them to the Postville Lodge, during the 30th Anniversary of the Toulon murders convention, so that they could sell it at the auction and make money off of it. It seems that they had this puppet to mock Adolf Hitler and when they found out it was worth a lot of money then they wanted to profit off of it. The puppet came to life at the hotel and hid in a hole in the back of their closet, where it spied on them. After Detective Brown had noticed several murders occurring throughout the hotel he had ordered all of the guests to meet in the lobby for questioning. It was during this time as Princess and Strommnelson were preparing to follow this order that the puppet had lunged out of the cupboard and knocked Strommnelson to the ground. After this the puppet had ripped his back open and crawled inside his body so that it could posses and take control of him.

While this was going on a Tunneler puppet had drilled a hole through the ceiling which allowed a Blade puppet to jump down and slit Princess's throat. Strommnelson then put up his collar and dragged her body away to hide it and then went down to the lobby with the other guests. In the lobby he would stand in the back of the lobby and not say a word and monitor the other guests and wait for the right time to strike and attack them. After some of the guests had successfully killed a Mechaniker puppet and were dissecting it to see how it worked, he had taken the opportunity to steal a gun out of a police officer's holster and shoot him in the head, he had then turned it at the crowd of guests and fired two shots, one of which had killed the hotel's maid and the other had wounded Brown in the arm. After this Brown had fired back and hit Strommnelson in the forehead which caused his lifeless body to fall to the ground and Markowitz then discovered the Fuhrer puppet embedded in his back and had removed it, then Ashley Summers had shot it in the eye, which revealed a mystical purple glow resonating from it.

After this Markowitz then stuck the puppet into an oven and turned it on, causing it to burn to death as revenge for how the Nazis had tortured his great grandfather in a concentration camp. It is not clear why the puppet chose to posses his body, it could be that he was a strong German man and because of that the puppet thought he would have been the perfect vessel.

Junior Fuhrer's death in an oven

Strommelson being taken over by Junior Fuhrer 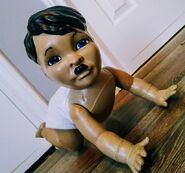