Totems are the avatars of Sutekh and his minions. They're the demonic warriors that can punish those who try to uncover their world, their secrets and their power.

Totems have sharp teeth and claws, they can also use magical powers to kill their victims, once they have killed someone they can drain the person's energy which gives it to the follower in the underworld. They also have the power to summon a portal back to their world in emergencies.

Rick Myers has been arrested under the suspicion of having caused the murders of Dr. Piper and Baker, but Dr. Jennings, the new director of the Artificial Intelligence research project and Rick's temporary superior, gets him out on bail. Blade has been confiscated, but he escapes from the police department's evidence room and jumps into Susie's purse as she comes to fetch Rick. Lauren lies comatose in the hospital following the events in the inn. Meanwhile, in the underworld, Sutekh decides to take matters into his own hands and infuses his life essence into his own Totem figure.

While Jennings professes skepticism toward Rick's story, he becomes actually quite interested in acquiring Toulon's secret, especially since the project's unofficial sponsors are luring with a sizeable contribution, should he succeed in presenting a prototype soon. Jennings returns to the Bodega Bay Inn with three hired thugs "Tom Hendy, Jason, & Scott" to collect the puppets and the formula, but in the meantime Rick is roused by a nightmare and finds Blade by his side. Sensing that something is about to happen, Rick and Blade depart for the hotel. Susie, while paying a visit to Lauren, witnesses her friend receiving a vision of Sutekh and his Totem. Unable to contact Rick, she proceeds to the hotel as well.

Jason enters the room that Cameron and Lauren had the Ouija board set up in. The Pyramid on the board starts glowing as Jason looks at it, the door slams behind him, and he looks in the puppet trunk as the Sutekh/Totem jumps out on him and claws him to death and takes his life-force. Scott encounters Pinhead and makes fun of him and Pinhead hits him in the jaw. Scott then enters the kitchen and attempts to hit Pinhead with a rolling-pin as Jester hits him between the legs with a meat tenderizer. Hendy encounters Sutekh/Totem and trips over a wastebasket as Sutekh/Totem claws him to death. Jennings finds Hendy's body and later on encounters Sutekh as Sutekh chases him until he is saved by Torch and Six-Shooter.

Sutekh knocks down Torch with his powers. Six-Shooter shoots Sutekh as Sutekh runs off. Jennings attempts to retreat, then he encounters Pinhead and Jester and he changes his mind. Jester heads to Rick's room as Pinhead sees Sutekh/Totem go through a door. Pinhead pounds on the door as Sutekh/Totem jumps on Pinhead and dominates him until Blade pulls him off and stabs him as he takes off flying. Rick goes back to his room and runs into Suzie; the door slams and locks them in. Rick gets on his computer and tries to figure out who the source is on the "Life Force Rick" and "Help Me!" messages, and the source turns out to be Lauren, telling Rick to activate The Decapitron. Jennings enters the room and tries to convince Rick to get his puppets and for them to leave. Jester enters the room and leads Rick to where the Decapitron is hidden.

Rick, Suzie and Jennings proceed to revive Decapitron, and Toulon advises them to leave the hotel while the puppets will engage Sutekh. Jennings, however, insists on taking one of the puppets with him, despite Rick and Suzie's warnings. Rick, Suzie, and Jennings take the elevator down as Scott encounters Sutekh/Totem and it claws him to death. As the elevator passes the floor he was on, Rick gets ready to step out of the elevator as Jennings starts attacking Rick. Rick kicks Suzie out of the elevator to get her out of harm's way as Jennings and Rick go back up. Jennings knocks out Rick with his flashlight; he steps out of the elevator and gets stopped by Jester and Decapitron along with Tunneler and Torch. As the elevator goes back down, Pinhead opens the door as Decapitron transforms his head into Jennings, informing Jennings that three lives were taken over Jennings' selfish greed. Tunneler and Torch go toward him and Torch flairs his flamethrower at Jennings as he falls to his death down the elevator shaft.

Sutekh corners Rick and Suzie, but Decapitron shows up, allowing them to escape. Sutekh weakens Decapitron with his powers. Sutekh gets shot by Six-Shooter as it distracts him for Decapitron to blast a bolt of lightning at him. Blade walks over to Sutekh and checks to see if he's dead. Jester sees Sutekh moving and tries to warn Blade but Sutekh knocks Blade into the wall and takes down Six-Shooter with his powers. He attempts to take down Blade with his powers, but having stayed too long in the mortal world, Sutekh's essence has become vulnerable, and his power wanes. In desperation, Sutekh attempts to escape back into the underworld by opening a portal, but Decapitron fires electron bolts at it, overloading the conduit and causing it to explode, destroying Sutekh.

Rick takes the puppets back home to repair and care for them. Toulon speaks with Rick one final time, again entrusting his puppets and their secret to him while they will act as his protectors. And Rick muses that his fight has now just begun... 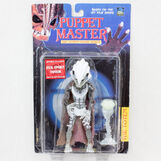 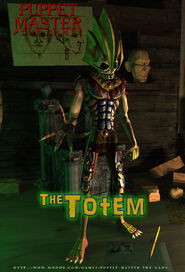