Deceased (eye impaled by Ninja and head crushed by Pinhead)
Klaus is a minor character in the original Puppet Master movie and one of the main villains in the movie Puppet Master: Axis of Evil.

Klaus is a German Nazi spy who arrived in America on a boat at Santa Monica Pier, California with his partner Max and many other Nazis (including Commandant Heinrich Moebius and Uschi). Max and Klaus have arrived in America to carry out two missions, the first is to locate Andre Toulon at the Bodega Bay Inn hotel and steal his puppets and the secrets which animate them and assassinate him.

When Max and Klaus arrive at the hotel they are spotted by Blade who runs to inform Toulon, who hides them in a secret compartment in his hotel wall before commiting suicide. By the time Max and Klaus enter Toulon's room, he had already died. They both searched his room but could not find his secret compartment so they left to their second mission. While they leave Toulon's room they bump into the hotel carpenter Danny Coogan. Danny was Toulon's friend and after hearing the gun shots he entered the room to see what had happened. Danny had been told about the secret compartment a few days prior and knew that Toulon wanted to hide them from the Nazis.

Max and Klaus arrive at a Chinatown in Los Angeles, California to fulfill their second mission (which coincidentally is in the same street that Danny lives in). They search for an American man who is planning to betray his country named Rowan Tomassi but all they find is a Japanese geisha woman named Ozu who joins forces with Max and Klaus to create a bomb and blow up the American's weapon factory. Max changes his name to Ben and using an American accent he gets a job at the weapon factory to gain access to the building and the floor plans.

Max meets Danny's girlfriend Beth who also works there and when Danny comes to visit her, he immediately recognizes Max as being one of the Nazis and tries to convince Beth this but she doesn't believe him at first so he uses Toulon's puppets to help him steal Max's things which include a map and bomb plans which then wins over his girlfriend's trust. Klaus kidnaps Beth and murders Danny's mother and brother. Danny revives his brother as a Ninja puppet and follows the Nazis to their lair in the China Town to rescue his girlfriend.

Klaus is attacked by Ninja who throws a shuriken at his eye and is finished off and killed by Pinhead who throws a Chinese dragon opera mask that is made of stone at his head. 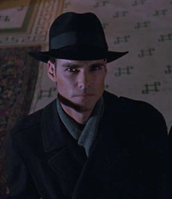 Klaus in the first movie 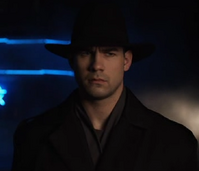 Klaus in Axis of Evil

Klaus being killed by Ninja and Pinhead
Community content is available under CC-BY-SA unless otherwise noted.
Advertisement