Kristen was one of the girls who lived at the Pi Kappa Sig sorority house. On Halloween, 1988, Neil Gallagher gained access to the house and pretended that his car had broken down and that he needed to use their phone. Kristen was a very flirty girl and tried to seduce him with her Play Boy Bunny costume. Neil would then command the puppets to kill all of the girls in the house so that he could use their corpses as test subjects.

Kristen saw Pinhead moving and was shocked to find out that the puppets could move, then he picked up a toffee apple and shoved it into her mouth which caused her to choke to death. After the puppets had killed all of the other girls Neil decided not to use them as his test subjects after all as he was disappointed in the way the puppets carried out the murders, meaning that their deaths had all been a waste. 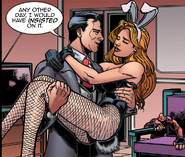 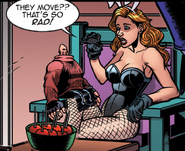