Kristen was a medical student who lived with a group of other girls at the Pi Kappa Sig sorority house. On Halloween, 1988, Neil Gallagher gained access to the house and pretended that his car had broken down and that he needed to use their phone. Neil would then command the puppets to kill all of the girls in the house so that he could use their corpses as test subjects. While Laura was taking a shower Jester waked in and wore a sheet over his body to look like a ghost to frighten her but it did not work.

Later that night while she was putting on her nurse costume, Pinhead came out from under her bed and grabbed her by the leg and pushed her onto the floor. She then grabbed a pair of novelty handcuffs and restrained him to the bed while she escaped. She was eventually killed by Kahn who had jumped onto her and repeatedly cut her with his two swords. After the puppets had killed all of the other girls Neil decided not to use them as his test subjects after all as he was disappointed in the way the puppets carried out the murders, meaning that their deaths had all been a waste. 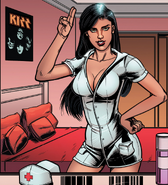