Major Collins is a member of the American military during World War 2. He kidnaps Beth and Danny Coogan to congratulate them for killing Max and Klaus the two Nazis that planned to blow up Mr. Gifford's weapon factory. He explains that he kidnapped them for his own entertainment because he doesn't see a lot of action and that it was no threat to them. He warns Beth and Danny that there were more Nazis that arrived in California on a boat and asks Sgt. Stone to guard both of them. He tells them that General Porter is arriving at a secret location and will give both of them an award for their bravery. During the secret award ceremony, an evil Nazi puppet called Bombshell follow them and shoots him and a newspaper photographer to death. 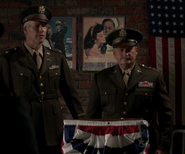 Collins getting shot at by Bombshell
Community content is available under CC-BY-SA unless otherwise noted.
Advertisement