Megan Gallagher was the wife of Neil Gallagaher who owned the Bodega Bay Inn in the late 1980's. While she may had loved Neil he apparently had alternate purposes for marrying her. He most likely married her to get full access to the hotel to search for Andre Toulon's secrets and the puppets he gave life to.

During their visit, she became an apparent love interest to Alex Whitaker .

Megan's family has owned the Bodega Bay Inn for many years and her parents ran it, up until their death. At some point, Neil Gallagaher came to the hotel and charmed his way into her life. Though he claimed to be staying at the hotel to work on a project, it was only a cover up for his true motives. Neil was searching for secrets of Andre Toulon to give him eternal life. During his time, he was more than willing to use her parents as experiments. Something Megan apparently knew nothing about, nor did she know of Neil's plans. He took advantage of Megan's grief and married her, for almost three years. Up until his apparent suicide, which shocked her.

Before his death, Neil told Megan in a letter of the group of "friends" that would arrive. Though she was very friendly to Alex, Dana, Carissa, and Frank. Eventually at diner, Dana bluntly and coldly told the truth of what they all thought of Neil. Upset she left the room and Alex consoles and explains their connections to Frank and how he got them to help in his research to find Andre Toulon. Megan would soon get a shock when she found Neil's body sitting up in a chair and fainted.

While it appeared Theresa did it, there was no real proof. Later on, Megan would show Alex the diary of Andre Toulon that Neil apparently found. But as she revealed this to him, Alex received a psychic vision from Neil. They immediately went downstairs and were confronted by Neil in the dinning room, along with the dead bodies of the colleagues. There, Neil revealed everything to the pair.

That he had staged his suicide to bring the psychics here, so that he could get rid of them due to their psychic links. As he worried they would want the secrets too and then hinted he might experiment on their dead bodies, since he grew tired of experimenting with the puppets. He then revealed that he killed Megan's parents as part of an early experiment and due to the factor that they were not as easily fooled by Neil's charm like Megan had.

Megan, angrily tries to hit him, only to be struck back by him. Something that seemed to even upset the puppets. Though Alex quickly came to her defense he was no match for Neil, physically. But Megan was able to get the upper hand and hit him with a vase. Eventually during another attempt to kill Alex, he got the upper hand on Neil and locked him in the elevator. And the two watched in horror as the puppets turned on Neil and killed him.

The next morning, the puppets were apparently gone. And Megan is seen kissing Alex affectionately as he leaves and takes Dana's stuffed dog with her. As she goes up the steps, she apparently resurrects Lerory, bringing him to life. Hinting that either she is the new Puppet Master or knew of Toulon's magic. Most likely far better than her husband.

A few years after the events of the first movie, the puppets had no master and returned to the Bodega Bay Inn where Blade killed Megan by extracting her brain out through her nose with his hook in the same way the ancient Egyptians mummified their dead. The puppets then used her brain matter to create a new elixir that they used to resurrect Andre Toulon from the dead.

Shortly after the puppets had killed Neil Gallagher, Megan had began studying Andre Toulon's magic and after mastering it she placed Neil's soul into Leroy, Dana Hadley's taxidermy dog.

After the events of the first Puppet Master movie, Megan had become the puppets new master and used them as guards in the hotel. On Halloween, a few months after becoming the puppet's master, a boy named Dean broke into the hotel dressed as a demon to scare Megan as revenge for her firing his father a few months prior. When the boy broke into the hotel however the puppets immediately attacked and killed him in protection of Megan. The next morning when she woke up she had no idea of what had happened that night and she told the puppets about how her parents use to decorate the whole hotel during the previous October months.

It is revealed that Megan and Neil had a son named Anthony, a psychic boy with a wooden leg who lived at the Boulderstone Institute. He would later become the puppet's new master. 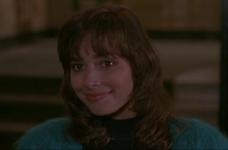 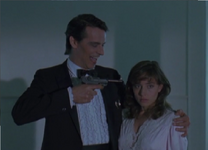 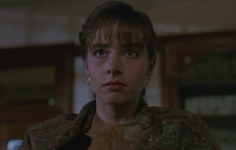 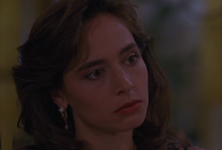 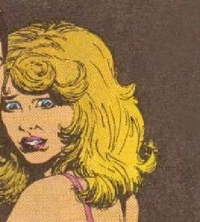 Megan in the Eternity Comics 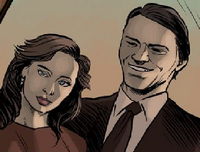 Megan in the Action Lab Comics