Merk is General Mueller's personal car driver in Berlin. Germany, during the 1940's.

Merk is killed when he is driving Mueller and Brunhilde in his car. Leech Woman and Blade break into his car and Blade kills Mueller, while Leech Woman unzips Merk's pants and spits a leech inside, which causes him to lose control of the car and crash it, killing everybody inside.

Merk in the Eternity Comics 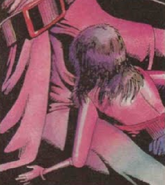