Money Lender is a Jewish propaganda puppet that Andre Toulon (The Littlest Reich timeline) or his family business had built sometime between the 1920's and the 1940's. This puppet was originally made to perform on the stage alongside Blade and was created to poke fun at the Jewish community.

This puppet is first seen on photographs at the tour of the Toulon Mansion, which were dated sometime between the 1920's and 1940's and it showed a Blade Puppet standing behind him with a knife at his throat. The first time the physical puppet is seen is after a woman had taken it to sell at the Postville Lodge in celebration of the 30th Anniversary of the Toulon murders convention. The night before the auction the woman had slept and a dark force had animated all of the puppets within the hotel to come to life and he had stuck his head out of a shoe box and saw her in bed sleeping. The puppet had then climbed up on her bed and let out a demonic laugh before using its claws to slice its way into the sleeping woman's vagina and climb inside her stomach.

During this ordeal she had woke in pain and stared down at her pregnant stomach as the puppet tore its way out of it and held her unborn fetus in its hands, the woman had then died and the puppet carried the dead baby away, which was still attached to her stomach with its umbilical cord. This puppet had also clawed to death a hotel guest at the top of the stairs, and shortly after Edgar and Ashley had drove a truck into Toulon's mausoleum, which had disrupted his dark powers and caused all of the puppets in the hotel to become inanimate. The Money Lender puppet is last seen tumbling down the stairs.

Money Lender has an elderly man's face with a long pointy nose, beard and is wearing a Jewish kippah and glasses. He has wood tone skin and wears a greenish grey suit with a vest , a purple tie with a flower pattern on it, along with a small pocket watch on the vest and has long claws and razor sharp teeth. His face is formed into a grin and he has bushy eyebrows. He is also a very small puppet with tiny legs. 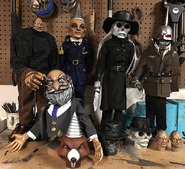