Deceased (Suicide by gunshot, later resurrected and stabbed by Blade, drilled by Tunneler and neck broken by Pinhead)
Neil Gallagher is a character and the primary antagonist of the film Puppet Master . Neil is the husband of Megan Gallagher, and like the other main characters of the film, is also a psychic who is a former colleague of Alex Whitaker, Dana Hadley, Frank Forrester, and Carissa Stamford.

Neil is also the main namesake of the film, being the Puppet Master and using them for evil. Neil is portrayed as being cruel, selfish, and lacked a conscience to those he hurt.

At the beginning of the film, it is revealed that Neil killed himself, but he manages to get Alex, Dana, Frank, and Carissa to come to Bodega Bay Inn by sending Alex visions of leeches on his stomach and sending Dana visions of being slashed across the throat with a knife.

Although Neil isn't shown in a majority of the film, he is seen in Alex's recurring nightmare of him putting a gun to Megan's head, and of a couple dancing in a ballroom.

Carissa also has visions of Neil raping a woman in an elevator, its not known if this was before or during his marriage to Megan. All Carissa states is "Its not his wife".

Out of the psychics, Dana seems to have the biggest dislike for Neil, who she makes upsetting remarks about at the dinner table.

Neil is seen frequently sitting up in chairs twice in the film (The first time is shortly after Theresa is killed by Pinhead , Megan sees it and faints. The second time is in Dana's room, which causes her to perform a spell on him.)

Alex and Megan meet a newly ressurected Neil whenever they decide to go into the dining room after Alex has several visions of the psychics being dead. Neil explains that "metaphysically speaking" he did kill himself, but he used the techniques of Andre Toulon to bring himself back to life. Alex says "You mean no natural end", to which Neil replies that it would take the total destruction of his body to kill him, something that Alex isn't capable of doing.

Neil then admits that he brought them to the hotel because soon or later, one of the psychics would learn he discovered Toulon's secret, and admits he is tired of experimenting with wooden puppets, and throws Jester against the wall (Which turns the puppets against Neil.)

Neil admits to not being the first human experiment, but rather that he experimented on Megan's parents. Megan proceeds to slap him, and he punches her.

Neil then begins to punch Alex, and they fight until Alex kicks Neil into the elevator (on an interesting note Neil tells Alex it's time to die so he can live forever, implying he killed the others so he could make them immortal as well), and then Pinhead shuts them up in the elevator.

Neil throws Pinhead against the wall and pulls out his head, but ends up being drilled in his leg by Tunneler . Neil then throws Tunnler agains the wall and tries to escape through the top of the elevator, but Blade cuts off his fingers and he falls back down inside.

Pinhead then holds Neil's head as Tunneler drills into the side of it, and Blade opens up his mouth for Leech Woman to vomit a leech inside of it.

Neil is ultimately killed by Pinhead when he breaks his neck.

In the Action Lab Comics Halloween Special, there is a prequel to the first Puppet Master movie showing Neil go to a sorority house and command the puppets to kill off the teenage girls who live there. He then kills and extracts the formula out of Kahn to use for his own immortality.

In issue eleven of the main series, a mysterious man came to the Bouldeston Institute. It is revealed to be Neil, who escaped death yet again somehow. He revealed himself to be the father of the current Puppet Master, Anthony. However when they revealed that Anthony escaped, Neil took a gun to his head and shot himself.

Then as he was about to be autopsied by a doctor, Neil suddenly returned to life, then explained he is working for Anapa, before he killed the doctor.

Neil Gallagher murdered by the puppets 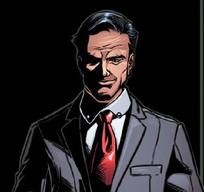 Neil in the Action Lab Comics 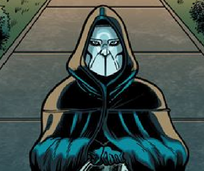 Neil in a mask trick or treating