Nickolaus is former SS soldier who is also a collector of occult artifacts. Some of the items in his collection include puppets that are alive or have been at some period of time. Some of the puppets in his collection include Freuhoffer's Puppets, Ninja, Indian Puppet, Tank and Mutant. He has also been hell-bent on hunting down Andre Toulon's main puppets too so that he can conceal them behind glass panels in his office. After successfully stealing Toulon's main puppets he was able to gain their trust and control them and he would then organize a party, where all the guests were people that helped him track them down and he turned it into a morbid game of who could survive the night the longest with the puppets hunting them down.

He had promised that he would share with the winner the ability to be immortal and proved this by inviting his old Nazi partner Fritz to show that he was not lying and that he had not aged a day since the 1940's. This also means that he had access to this secret for several decades and he also reveals that he had been working with Six-Shooter all those years and using him as a pawn to fulfill deeds, which explains why that puppet is absent from some of the movies. After the party had finished, there was no surviving guests so he had no choice but to keep the magic for himself and then he returned the puppets back to his glass case. After this he started making plans to organize a second party with the same goal, but he was interrupted when Neil Gallagher and Anapa's puppet teleported into his mansion.

Neil shot Nickolaus in the heart with a Luger and killed him, which showed that he could still die from trauma, and his immortality only prevented him from ageing and having a natural death. After this Anapa had stolen all of Toulon's main puppets and the rest of them he had used his powers to scramble them into pieces and assemble them into a new puppet which he called The Collection, and Nickolaus's soul was used to give it life. Nickolaus's soul was eventually erased permanently, after Decapitron had used a special Pharaoh head with a soul erasing crystal to destroy The Collection. 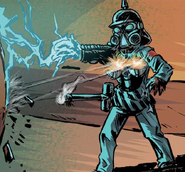