Oberheller Friede Steitze is German woman who is a member of Adolf Hitler's Band of German Maidens movement and also a dominatrix of sorts who worked at a secret hideout in California during 1942 along with Sturmbahnfurher Krabke, Doktor Gerde Ernst and a large group of Nazi spies. During this time she crafted five syringes full of the Elixir stolen from Dr. Freuhoffer into a glove and would seduce fellow Nazis at the brothel located in their secret hideout and stab them to death with the syringes. The elixir inside would create a chemical inbalanace inside the victim's blood causing them to die in a horrific way which would make their blood spray out all over the place. This was many decades before Neil Gallagher had perfected the elixir to work on human beings.

Oberheller believed in always being useful to her group and being cheerful at all times. Gerde grew to accept her as an important part of their group after she saved her life by stabbing Pinhead in the back while he attempted to strangle her and also witnessing her murder people. Gerde would then proudly refer to her as a remarkable monster. Oberheller escaped unharmed during the time Brooks raided the hideout with the puppets. It is unknown what happened to her after this. 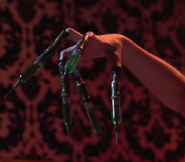 Her weapon of choice