Deceased (shot in the head by Commandant Heinrich Moebius)
Ozu is a Japanese woman who is hiding out in a Chinatown in California, her plan is to blow up the American's weapon factory using help from two Nazi spies: Max and Klaus.

Max and Klaus are heading to an Opera House in Chinatown, under orders from the fuhrer, where they meet a Japanese saboteur named Ozu. She tells them that she's under orders from her emperor, which are for her and the Nazis to work together to take out an American bomb manufacturing plant , destroying America's war efforts. To obtain this goal, it requires Max to go undercover and pretend to be of American descent and work at the plant, and has to get close to the girl who runs the plant's office, Beth, who is coincidentally Danny's girlfriend. The next day, after bringing the puppets to life, Danny walks into the plant to show them to Beth, and sees Max there. Recognizing him as one of the assassins, he tries to warn Beth away from him, but she doesn't believe him.

After Max leaves the plant, Danny follows him back to the Opera House, and uncovers their plan. Danny is seen by Max, and quickly leaves. Max calls the Bodega Bay Inn to find out where he lives and sends Klaus to Danny's mother's place where Elma and Beth are planning a bon voyage party for Don. Klaus shoots Elma, and kidnaps Beth, and also shoots Don when he unexpectedly comes home. Danny comes home to find Don bleeding to death, and after telling him what happened, thanks to Toulon's diary, puts his brother's soul into Ninja's body. Danny and the puppets head out to the opera house to get Beth. Tunneler and Leech Woman kill Ozu's men and Ninja and Pinhead kill Klaus. Danny saves Beth, but Ozu badly hurts Ninja, so Danny and Blade threaten Ozu with the active bomb to back off, which is taken by Max, and supposedly disables it. Ninja, with what little left of life he has, stabs Ozu's sword into back killing him. Ozu takes off with Tunneler and supposedly Jester and Leech Woman inside the bag, leaving behind Blade, Pinhead, and the mortally wounded Ninja behind. Danny swears that Ozu has a war coming to her.

Ozu walks down a dark alley only to be stopped by Moebius, a Nazi general. Ozu offers him the puppet Tunneler, in exchange for her freedom. Moebius gladly takes the prize, which immediately kills one of the Nazis. Moebius "sets her free" by shooting her in the head. While this takes place, the puppet Blade watches from the shadows. 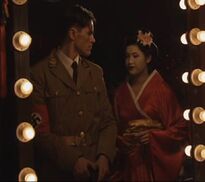 Ozu in Axis of Evil 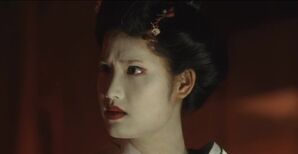 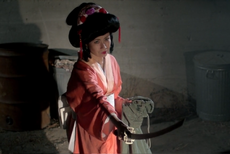 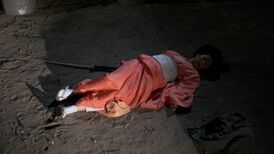 Ozu after she was shot and killed by Commandant Heinrich Moebius