Pajama Boy is one of Andre Toulon's inanimate puppets that he had built during the second World War that he had hanging up in his room at the Bodega Bay Inn hotel.

Pajama Boy has the face of a baby with white eyes that lack pupils. He wears red (or orange) overalls with white (or red) polka-dots on them. He wears large white clown shoes and a square hat that is the same color as his clothes.

In the first movie and Puppet Master: Axis of Evil, Pajama Boy is nothing more than just a background prop hanging up in Andre Toulon's Hotel Room. He does not come to life at any point of these movies he is just merely a background prop.

After Toulon's suicide Madam Adon got access to all the inanimate puppets that were left behind at Bodega Bay Inn and started a business where she was paid by clients to temporaily teleport their soul into one of Toulon's puppets so that the client could get revenge on people while in the puppet's body.

Pajama Boy was also used as a pawn during Anapa and Miss. Camille's puppet war where he attacked Anthony by climbing into his mouth and attempted to suffocate him. Blade pulled him out of Anthony's mouth and destroyed him by cutting him to pieces.

His appearance in the original movie

His appearance in Axis of Evil (top right)

Drac, Kahn and Pajama Boy being used as pawns in Miss. Camille and Anapa's battle

His method of attack

Blade freeing him from Anthony's mouth 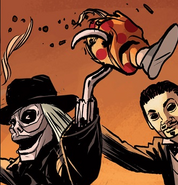 Blade celebrating after destroying him

Clippo the Clown puppet that his design was based on