Deceased (Possibly natural causes)
Peter Hertz was a young boy from Berlin, Germany during the 1940's who would watch Andre Toulon's puppet shows with his father.

During 1941 Peter would watch Andre Toulon's puppet performances with his father and later on his house was raided and his mother was arrested by the Gestapo Nazis because she was from Poland and they claimed she was a spy. Peter and his father escaped and became fugitives living in an old bombed-out building. After Toulon escaped from the Nazis he met them there and they became fugitives together. Peter was a big fan of Toulon's puppets especially Six-Shooter and helped by bringing Toulon supplies and food. During one of these missions he was found and captured by Dr. Hess, and was forced to tell him where Toulon was hiding.

Peter's father turned Toulon in to the Nazis in exchange for freedom of his wife and Peter helped Toulon escape and exact revenge on Major Kraus. Peter escaped to Switzerland where his relatives lived and Toulon escaped to America. Peter changed his name to Eric Weiss and wrote to Toulon many times but they never saw each other face to face.

When Eric was an old man he went to the Bodega Bay Inn to look for Toulon, but all he found was the puppets and a tape recorder which he had left for him. Maclain an assassin breaks into the hotel and tortures Eric trying to get Toulon's secrets out of him so she can know how to kill the puppets and free their souls. Eric shoots her and unknown creatures enter his room to kill him, he shoots one of them and what happened after that is unknown.

Many years after this Eric continued to live in the United States and would operate and antique store. He was still deeply obsessed with Toulon's legacy and even purchased the original Mephisto puppet from an Egyptian merchant. After he had died, possibly of natural causes, he had passed all the information he had learnt from Toulon onto his grandson Isaac. Isaac created a cult community in his grandfather's memory known as Peterstown, where he would gather a community of people and convince them to commit suicide so they could be reborn in mannequin bodies and live forever. 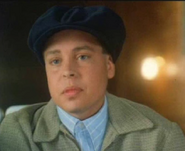 Peter as a young boy 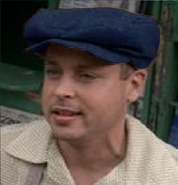 Peter with a gun