Puppet Master 8: The Legacy (Otherwise known as Puppet Master: The Legacy) is a 2003 horror film written by C. Courtney Joyner and David Schmoeller, and directed by Charles Band. It is the eighth film in the Puppet Master franchise, the sequel to 1994's Puppet Master 5: The Final Chapter, and stars Jacob Witkin as an elderly Peter Hertz (a character who appeared as a child in Puppet Master III: Toulon's Revenge) and Kate Orsini as a mercenary hired to confront Hertz for information regarding the magic puppeteer Andre Toulon used to animate his puppets.

The rogue agent, Maclain, in one of the rooms in the Bodega Bay Inn, reading Toulon's diary, hoping to find some secret to the formula. While reading, we are viewed a flashback from Puppet Master II.

It's 1926, and Andre Toulon (Steve Welles)'s puppet set has been burned down. He and his wife Elsa (Elizabeth Maclellan) are introduced to a Cairo Merchant (Ivan J. Rado), who in fact happens to be the one who burned down the set. He claims to Toulon that there's another way of reanimation. He offers Toulon to buy the formula instead of using Afzel's Egyptian ring to bring puppets to life. Toulon and Elsa agree to buy it.

Cut back to present day, the diary bursts into flames (due to a light shining against a magnifying glass) and Maclain continues to search around the hotel for more evidence. As she enters the basement, she finds a man named Eric Weiss (Jacob Witkin) talking to the last Toulon puppets: Blade, Pinhead, Jester, Tunneler, and Six-Shooter. Eric explains that he knew Toulon before he died, and that he swore he wouldn't pass it to anyone else. Maclain threatens Eric with a gun, and says that she's planning on selling the secret on the open market and if Eric doesn't cooperate she will kill him. Eric then takes out a tape recorder, and plays a recording that Toulon left him, which tells us when he first got the secret to reanimation.

We are then shown a clip from Retro Puppet Master, where Toulon (Guy Rolfe), in 1941, in the Koleweige Inn, talking to his puppets about his previous puppets in 1902. We are then taken back to 1902, Paris, France, when Toulon (Greg Sestero) performs Dante's Divine Comedy. He is then greeted by Afzel (Jack Donner), who is a 3,000 years old Egyptian sorcerer and has stolen the secret to reanimation from the Demon God Sutek. Afzel teaches Toulon the secret before he commits suicide in order to not be killed by one of Sutek's servants (Stephen Blackehart). Toulon, along with the puppets, chase after the servants when the servants keep Toulon's soon to be fiancee Elsa (Brigitta Dau) held captive. After defeating the servants, the Puppets, Toulon and Elsa continue their lives.

Cut back to present day, after the tape recording's finished, Eric reveals that his real name is Peter Hertz, the boy who was saved by Toulon in Puppet Master III: Toulon's Revenge, and then he starts telling Maclain the adventures he and Toulon had together.

We are then shown clips from Puppet Master III: Toulon's Revenge, where Peter (Aron Eisenberg) is watching Toulon (Guy Rolfe)'s puppet show in 1941, Berlin, Germany, and being viewed the puppets after the show is performed. After everyone leaves, Toulon and Elsa (Sarah Douglas) are confronted by Lt. Eric Stein (Kristopher Logan), who is a Nazi assistant to Major Kraus (Richard Lynch). When Toulon and Elsa aren't looking, Eric takes some pictures of the puppets moving and shows them to Kraus, who thinks might be able to help Dr. Hess (Ian Abercrombie), who is being forced by Kraus to create a drug that can bring dead soldiers back to life so they can use them as shields. After the Nazis' confront Toulon, they shoot Elsa, who tried to attack Dr. Hess. While being traveled back to Head Quarters, along with Pinhead and Tunneler, the puppets kill the Driver and the guard and they escape. While hiding from the Gestapo, Toulon brings his wife back to life by putting her soul into Leech Woman, who kills Lt. Stein soon afterwards. The next day, Six Shooter kills General Mueller (Walter Gotell), and Toulon is greeted by Peter and his father Matthew (Matthew Faison), who too are also in hiding from the Gestapo. Matthew, however, makes a deal with Kraus to bring forth Toulon in exchange to leave Germany forever along with Peter Hertz. Meanwhile, Dr. Hess, who is very interested in Toulon's formula, wants to become his friend instead his enemy. The Gestapo find Toulon's hiding place and a fight begins, ending with the deaths of three soldiers, Matthew, and Dr. Hess himself. Toulon then puts Dr. Hess's soul into his new puppet, Blade, and he and the puppets get revenge on Kraus. After killing him, Toulon, Peter and the puppets escape Germany to Switzerland, Peter's hometown.

After the conversation, Maclain, stressed out, shoots Eric in the knee, knowing he knows more about Toulon and his puppet's bloody legacy, such as Toulon's suicide.

We are then shown in a flashback from Puppet Master where Toulon (William Hickey) kills himself.

Eric, believes that Toulon only killed those who deserved to die. Maclain, however, brings up the subject of the murders that happened with the parapsychologists in Puppet Master II.

After the argument over whether Toulon was good or bad, Maclain still threatens to shoot Eric with the gun. Eric tells her that the puppets fought a war that was a hell of a lot tougher than anything they ever known, and then he plays another tape recording of Toulon, which tells about Sutek's attempt to steal the elixir formula to kill the Puppet Master.

We are then shown clips from Puppet Master 4, where Sutekh sends three of his totem children to go up into the real world and kill those who are close to finding the secret of reanimation. The people discovering the secret are all involved with something known as the Omega Project. The totems kill Dr. Piper (Stacie Randall) and Dr. Baker (Felton Perry). Meanwhile, another scientist named Rich Myers (Gordon Currie) is also involved in the Omega project, and is the caretaker of the Bodega Bay Inn. Also involved in the project is Rick's colleague Cameron (Ash Adams). After inviting Cameron, Rick's girlfriend Susie (Chandra West), and Cameron's girlfriend Lauren (Teresa Hill) over to dinner, Lauren (who is a psychic), finds a trunk that contains the puppets and brings them back to life with the formula. Meanwhile, Sutek, realizing that the puppets used to belong to Andre Toulon (who he tried to have his henchman kill in Retro) tells the totems to not only kill Rick and Cameron, but also kill the puppets. The Totems break into the hotel, and kills Cameron, and tries to kill Rick. The puppets kill two of the Totems, but soon they animate another puppet, the Decapitron, who can morph his head into any person he wants, including Toulon (Guy Rolfe). The Decapitron kills the last totem and Rick knows that there was more to come.

After the recording finished, Maclain tells Eric that she knows everything about Rick, because before she came to the hotel, she went to Rick's house where she found Toulon's diary. When Rick didn't cooperate to give up the diary, she shot him and his friends four times and took the diary with her. Seeing that there's one last recording, Maclain threatens him to play it. The recording talks about how there's always someone discovering Toulon's secret, even after his supposed death, always someone who didn't fully understand what a gift, or a Curse...the formula for the puppets really was.

We are the showed clips from Curse of the Puppet Master, where the puppets have been put up for an auction and have been bought by Dr. Magrew (George Peck). After four years of having the puppets, Dr. Magrew is trying to find a way how to transform humans into puppets. The purpose of the experiments is to help prolong mankind into and past the nuclear age, where puppets (now with human intelligence) can survive, where humans wouldn't be able to. His daughter, Jane (Emily Harrison) comes home from college and has no idea of her father's experiments. They meet a young man named Robert (Josh Green), who is a gifted wood crafter. Believing he's found the perfect victim for his experiments. Magrew gives Robert some work to do in order to keep things going and to make sure Robert doesn't get suspicious. However, Robert has a crush on Jane, and she starts beginning to get in his way of working. Not only is Jane getting in his way, but bully Joey Carp (Michael Guerin) is getting in his way. After Joey tries to sexually harass Jane (but in the process injures Pinhead), Magrew sends Blade and Tunneler to kill Joey. After tricking Jane to go to the other end of town to pick something up, Magrew begins to work on Robert. After putting Robert's soul into a puppet Magrew already had for Robert, the puppets, after watching Magrew do his experiments for four years, have finally had enough and they attack him. When Jane comes back, after realizing her father tricked her, she finds her father bleeding to death on the floor, and Robert in a tank puppet with a visual display unit for a head. "Tank" points his arm at Magrew, which shoots out electricity and kills Magrew, with Jane screaming in terror.

After the recording, Pinhead throws a mallet at Maclain's head and Eric shoots her in the heart with her own gun, for trying to take over the puppets. Maclain, minutes away from death, explains that's not what she wants, and she tells Eric that the puppets brought Toulon back to life.

We are then viewed clips from Puppet Master II where the puppets bring Toulon back in Puppet Master II, and how he began his final experiment: soul transference. We're then shown Toulon (Steve Welles) keeping Carolyn (Elizabeth Maclellan) captive because he believes that she's a reincarnation of his deceased wife Elsa. He transfers his soul into a mannequin in order to get out of his decomposed body form, and as he's about to transfer Carolyn's soul into the other mannequin , the puppets, who now realized that their master has used them for his own personal needs, attack him and kill him. Meanwhile, Carolyn's boyfriend Michael (Colin Bernsen) breaks into the room and the two of them escape.

Maclain then explains that she's not here for the secret of bringing the puppets to life (she wasn't even planning on selling the secret to the open market), she wants to know what makes them die for good. Maclain finally explains: I was sent here for the secret by the creatures Toulon left behind. The immortals, souls trapped in wooden bodies, living every day in agony. All they want is revenge on their Puppet Master, and now that's [Eric]. Congratulations on your legacy. After explaining, Maclain drops dead on the floor. Eric hears something behind, turns around, saw someone coming, points the gun at the camera, and shoots it. Then a note appears:The producers would like to thank all the cast and crew that helped make the Puppet Master series a tremendous success over the years. 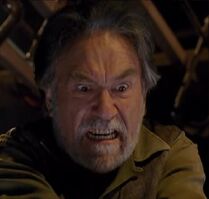 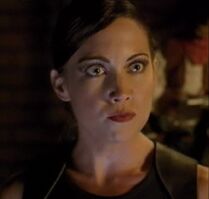 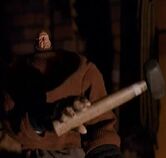 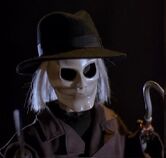 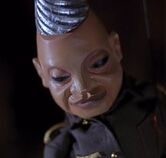 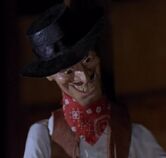 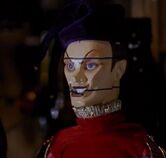 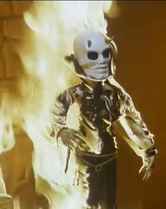 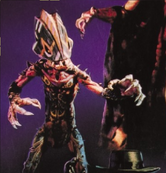 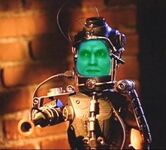