The original line of replicas, each one of the replicas were hand made by artist Terry Cruikshank and limited to 200 pieces. They were all numbered under their feet and came with a signed certificate by Charles Band. The Six-Shooter replica was limited to only 100 pieces. All of the puppet's heads were original designs with the exception of Blade, Pinhead and Six-Shooter. Blade's head was cast from the Puppet Master vs. Demonic Toys prop, Pinhead's head was cast from the prop from the first five movies and Six-Shooter's head was later used in Puppet Master: Axis Rising. 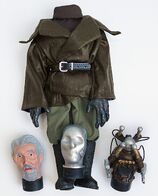 The Battle Damaged puppets were replicas based on four of the main puppets. Each one wore a different colored outfit that was ripped and torn to show that they had been through a battle. The Blade replica also had small daggers popping out of his eye sockets, something that the original replica lacked. They were each limited to 200 pieces. These replicas were produced in a factory in China.

Three replicas that wore all black clothing. Pinhead and Six-Shooter were based on their designs in Puppet Master: Axis Rising. Torch and Pinhead were limited to 500 while the Six-Shooter was limited to 200 as it was the most expensive to build. There was also a rare Decapitron replica that was limited to 120 pieces and sold only at Full Moon Roadshows from 2008 onward. 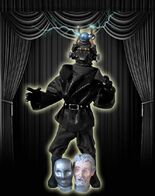 Three limited edition Blade replicas. The red variant had a red lined trench coat and shiny chrome weapons and was limited to 500 pieces. The blood splattered replica were originally limited to only 100 pieces and wore a white outfit and was drenched in blood. In September, 2017 the blood splattered replicas were re-released due to high demand. The Reanimation Blade was limited to 1000 pieces and was based on the movie Re-Animator and his appearance in Axis Termination and came with a syringe that could be placed onto his arm instead of his usual weapon. His face and weapons would also glow in the dark. 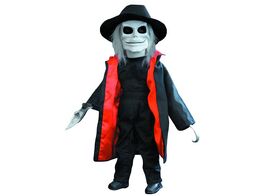 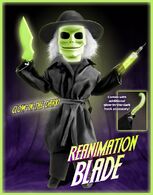 Three replicas based on the puppets from Retro Puppet Master, each one used the exact head mold from the movie that was created by artist Jeff Farley. These were limited to only 200 each.

Three replicas based on Dr. Freuhoffer's Puppets in the movie Puppet Master: Axis Rising. Each one was limited to 500 pieces each and cast from the original molds used in the movie created by artist Christopher Bergschneider.

Blood splattered variants of the main puppets. These replicas were set to be released in the summer of 2016 and were made to tribute Puppet Master: Axis Termination, which was the goriest movie in the franchise. These replicas never actually came out as announced, and it is possible that the re-releases below were made instead.

A re-release of the original replicas that were released in October and November of 2016. The two replicas were Jester and Torch, they looked identical to the original replicas, but a slightly different paint scheme and slightly different clothing material. There were only 15 made of each. In December 2016 there was also a limited run of Tunneler and Pinhead replicas that were known as the 'Axis' or 'Advanced' replicas. These were limited to only 10 each and were similar to the first line of replicas but also had different materials for their clothing.

During December 2017 a more accurate Jester replica was made that was limited to 200 and created by Tom Devlin and Jeffrey Chang at 1313FX crew.

These replicas were produced during March 2018 by effects artist Tom Devlin. These puppets were made to look as they appeared in Puppet Master: Axis Termination. In their initial release they were limited to 25 units of each puppet, with more to be made later on. Blade, Pinhead and Jester's heads seem to be cast from the original props from the first five movies and Tunneler's head is cast from the prop used in Axis Rising and Axis Termination (which was created by a fan artist named Rolo). On May the 2nd there were also Six-Shooter (with removable guns) and Mephisto (with the original head sculpt) replicas produced, both limited to 25 units each. On March the 31st there were also a limited run of Leech Woman and Torch replicas produced. 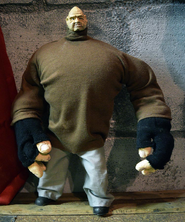 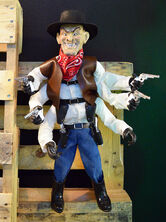 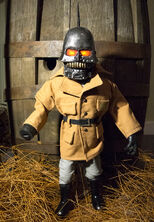 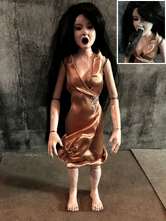 In September 2019 there were more replicas that were almost identical to the Devlin Factory ones but with slightly different paint jobs and clothing material. 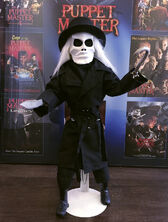 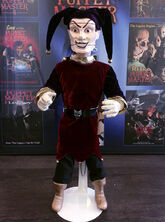 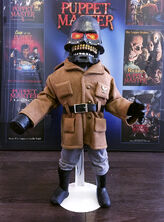 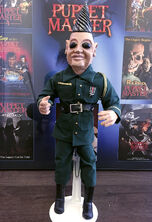 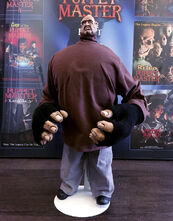 These two replicas were released in very limited supply and for great expense to celebrate the 30th anniversary of the release of the original movie. These replicas were the most screen accurate of the bunch and a lot of money was put into their creation. The Blade had a unhinged jaw and the Torch had eyes that could really light up. Both puppets had ball joints in their limbs so that they could be properly posed and heads which were cast from the original props, unlike the original replicas which had heads that didn't resemble their film counterparts as much but this line was canceled 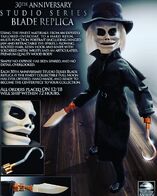 These were special limited edition replicas of Jester, Blade and Pinhead that Charles Band would sell at his Full Moon Roadshows in the mid 2000's. Charles claimed that they were screen-used stunt props, but in actuality they were only replicas. Jester and Blade's heads were cast from the molds of Puppet Master vs. Demonic Toys, where as the Pinhead replica's head was cast from the original five movies.

In 2010 there was two San Diego Comic-Con exclusive replicas both limited to 50 each the first one was Retro Blade and the other was Dr. Death. They were sold with the original first run of replicas and the roadshow ones

Charles Band signed certificate which comes with each replica 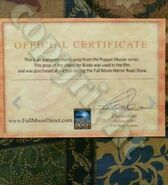