Not much is shown about Tank's background in the film, but he does reveal that he is an orphan to Jane Magrew . Tank is depicted as not being a very smart young man, but he has a natural talent for carving wooden figurines and because of this he is hired by Dr. Magrew to work at his House of Marvels, carving wooden puppets.

When we are introduced to Tank in the film, he is a tall, young man who works at a gas station. The town bully, Joey Carp , is then seen harassing and teasing Tank, but soon Dr. Magrew and Jane show up and chase them off. Jane finds the wooden figurine that Tank carved and compliments him on it. Dr. Magrew hires him and asks for his name, which he reveals to be Robert Winsley.

Robert is then given the blueprints for Dr. Magrew's puppets, and doesn't understand how the puppets can sustain life on their own.

Much foreshadowing in the film is given about Robert's untimely fate such as when Dr. Magrew tells him that he has to put his soul into a dead object to make it live (During the conversation about the puppets sustaining life), and Robert's recurring nightmares about having puppet parts.

During the film, he begins to have a romantic relationship with Dr. Magrew's daughter Jane, even throwing Joey against a car when he teases him and tries to rape Jane in front of him. Later in the film, Dr. Magrew finds out about this and it becomes one of the main catalyst for Dr. Magrew's dislike for Robert.

Later that night, Joey attempts to break into Jane's room but is attack by Pinhead . He slams Pinhead on the ground and stomps him, breaking his right arm and hand. Robert then takes Pinhead and fixes him, which makes Jane happy.

Eventually, Robert becomes ill and Dr. Magrew sends Jane to town to pick up a unicorn while he takes care of the sick Robert (This is just a ruse to put Robert's soul in the puppet by sending Jane out of town.) Dr. Magrew is successful at putting Robert's soul into the Tank puppet.

The other puppets however, aren't pleased with Dr. Magrew killing Robert, and Blade leads the attack, slashing Dr. Magrew while Pinhead hits him with a metal pipe and Tunneler drills him. However, Robert gets the last attack by shooting an electrical beam between Dr. Magrew's eyes, ultimately killing him as the credits roll. 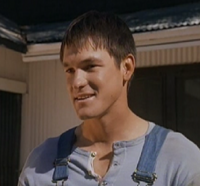 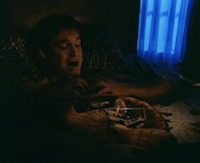 Robert's nightmare of himself becoming a wooden dummy 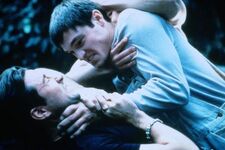 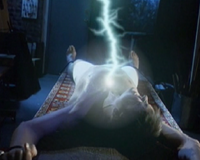 Robert's death before his soul is transferred into the Tank puppet
Community content is available under CC-BY-SA unless otherwise noted.
Advertisement