The Scroll was an ancient papyrus that contained the secrets of life, death and resurrection. The scroll also contained the formula known as the ancient Egyptian rites of afterlife and ingredients to create the Elixir the potion that would be used to bring Andre Toulon's puppets to life. The magic on the scroll was born in the black fires of the beginning of time and belonged to Sutekh (although in Puppet Master 2 Toulon claims it belonged to Osiris, but in Egyptian mythology Sutekh did kill his brother Osiris so he may have stolen it from him).

It was also confirmed in Puppet Master: Axis Termination by Dr. Ivan that the scroll did indeed belong to Osiris. The magic was originally passed down to a select few sorcerers to use to give life to inanimate figurines but was later used for evil by Sutekh. Afzel stole the scroll from Sutekh's Temple in Cairo, Egypt many centuries ago and passed it onto Andre Toulon in 1902. Toulon kept it and guarded it with his life. According to Afzel, Sutekh and other elder gods are binding their time to attack mankind and will rise in a thousand years and only the secret of life can save the world. 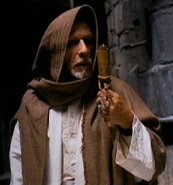 Afzel with the scroll

A young Andre Toulon with the scroll

Andre Toulon hiding the scroll from the Nazis

Andre Toulon with the scroll, after he was resurrected 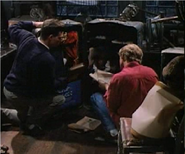 Dr. Ivan with the scroll

Close up of the scroll

Elisa's Russian notes on the scroll

Two papyrus scroll in The Littlest Reich, which are written in unidentified languages

Osiris was an Egyptian god, usually identified as the god of the afterlife, the underworld and the dead. He was classically depicted as a green-skinned man with a pharaoh's beard, partially mummy-wrapped at the legs, wearing a distinctive crown with two large ostrich feathers at either side, and holding a symbolic crook and flail.

According to Egyptian mythology, Osiris's brother Set better known as Sutekh, along with the Queen of Ethiopia, conspired with 72 accomplices to plot the assassination of Osiris. Sutekh fooled Osiris into getting into a box, which Sutekh then shut, sealed with lead, and threw into the Nile.

Isis, the wife of Osiris searched the river and found the body of her beloved husband. She used a spell learned from her father and brought him back to life so he could impregnate her. Afterwards he died again and she hid his body in the desert. Months later, she gave birth to Horus. While she raised Horus, Sutekh was hunting one night and came across the body of Osiris. Enraged, he tore the body into fourteen pieces and scattered them throughout the land. Isis gathered up all the parts of the body and bandaged them together for a proper burial. The gods were impressed by the devotion of Isis and resurrected Osiris as the god of the underworld.

In Puppet Master 2, Andre Toulon claims that Osiris is the owner of the secret but in Puppet Master 4 he claims it was stolen from Sutekh. It is possible Sutekh murdered Osiris to steal the secret which he wanted to use for evil. Andre Toulon also owns the magical scroll with pictures of Osiris in it that he hides in the puppet's trunk. It is confirmed in Puppet Master: Axis Termination by both Doktor Gerde Ernst and Dr. Ivan that the scroll does indeed belong to Osiris.