Sheriff Garvey is the county sheriff of the California town that Dr. Magrew lives in. He is investigating the disappearance of the local boy Matt Deary. He drives to Magrew's House of Marvels with his deputy to question Magrew, as he had discovered that Matt had been working as a wood carver for him. Magrew had lied to Garvey and told him that he had left to go help his sick father, but Garvey suspects that he is being lied to and threatens to return again if he finds anymore leads. After Magrew had sent Tunneler and Blade to murder Joey Carp for abusing his daughter, it had lead Garvey to question Joey's friends and none of them cooperated with him because they thought Joey was just hiding and they didn't want to get him into trouble.

After this Garvey lost his temper and broke Art Cooney's nose by slamming his head against a wall and then he had told him that the last thing Joey had told him was that he was going to pay Jane Magrew a visit. This is what lead Garvey to suspect Magrew again in the disapearance and murder of Matt and he and his deputy had broke into his house with his gun drawn to make an arrest. When they got inside Magrew had been waiting for them and he had commanded Six-Shooter, Pinhead and Tunneler to kill Garvey's deputy and then Blade stabbed Garvey in the leg, and as he was crawling away to escape he had his face stabbed by Jester, who was wielding a sharp pair of scissors and then the two puppets repeatedly stabbed him in the face, killing him as he screamed in terror and pain. 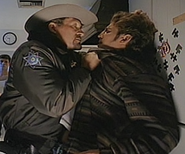