Trading Cards with pictures and biographies of each of the puppets.

These cards were released as a promotion for the very first movie back in 1989. These cards featured Pinhead, Blade, Jester, Leech Woman, Tunneler and the movie poster that would change its image if seen at a different angle. 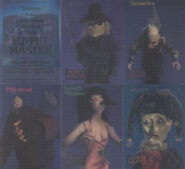 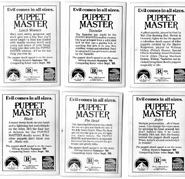 Back view of cards

In 1991 Full Moon released cards of Torch, Blade, Tunneler, Jester and Pinhead as a promotion for the second movie. These cards also could be peeled off of their base and be used as stickers.

These cards were released as supplements with the Action Figures of the late 90's.

In 1997 Full Moon released a box of collector cards for most of the movie franchises that they had made. Each of the cards included artwork of one of the puppets as well as detailed information about them.

In 2010 Full Moon released cards with each of the puppets and movie posters as a promotion for Axis of Evil. These cards could be purchased from Fullmoondirect or could be found inside the Toulon's trunk Blu-ray box.

In 2019 there were trading cards based on the Deadly Ten project. These cards were sold exclusively on Fullmoondirect and one of the card was the poster art for Blade: The Iron Cross.

2020 exclusive cards that were limited to only 99 packs. Each pack contained three metal cards printed on double metal stock featuring Blade, Pinhead, and Jester. Each card is individually serial numbered to 99. Each pack also includes the lenticular 3D card of the iconic Puppet Master poster. Each pack also included an original art 1 of 1 sketch card. The cards were done by well known artists in the trading card industry such as Michael Mastermaker, Huy Troung, Mick & Matt Glebe, Ingrid Hardy, and more. 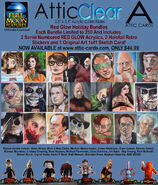 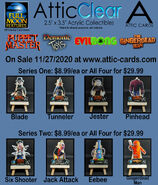