Puppet master Wiki
Register
Don't have an account?
Sign In
Advertisement
in: Soul of a puppet, Hero, Human,
and 5 more

Valentin is a French puppeteer that works with Andre Toulon at his theater. Valentin is the mean one of the group and often mocks Toulon. He is a skilled handyman and fixed the door on the theater, but doing so he knocked down Afzel's protection sign and the mummies traced the location. When Sutekh's mummies broke in to the theater, he immediately tried to attack them with a hammer. He is the first one of the group to be murdered by the mummies. Toulon placed his soul into Retro-Blade. 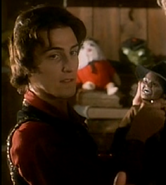 Valentin being attacked by the mummies

Valentin after the mummies killed him