The Watchers are three corrupt followers of the demon lord Sutekh who live in the underworld with him. The Watchers are unable to access the real world but can enter it using the body of a Totem avatar. The watchers cut themselves and bleed into a Totem doll and can be summoned into the real world with a Ouija Board. They can see everything that the Totem can see through a special looking glass. While they are in control of the Totem they can drain human's energy and make themselves stronger, but any injury dealt to the Totem is dealt to them, this includes death. When the puppets kill all three Totems, the watchers die too. 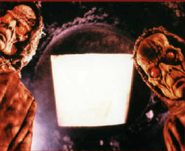 A Watcher being electrocuted after his Totem had died

Another Watcher being electrocuted

Watchers watching down on their victims
Community content is available under CC-BY-SA unless otherwise noted.
Advertisement